Hi guys! Sorry I've been such a bad blogger. It's hard to blog when all 3 aliens are home from school and are not in summer camp. What kind of stupidity is this, you ask? Yes, I was suckered into not sending them to camp by illogical arguments and the use of the sad eyes. 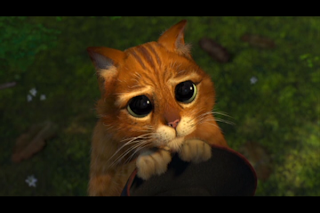 For some reason, Angus and youngest do not like summer camp. Too energetic, they claim. Lazy bums. Oldest is the only one a little bummed out about not going to camp but I've been filling their days with the pool, museums, zoos, movies, playdates, and popsicles. Between constantly entertaining them, feeding them, driving them, feeding them, breaking them up, feeding them, etc. - I barely have time for myself. And because the summer hours have them staying up later, they are cutting into my valuable writing time at night. This is all my excuse for being a bad blogger.

So lately they've been on a zombie drawing kick. If you've seen me on twitter, you've probably seen me uploading pictures of fat zombie, soccer zombie, and my favorite - the Hasidic Jew zombie. But I do think the best of the bunch was this one - Cinderzombie by Angus. 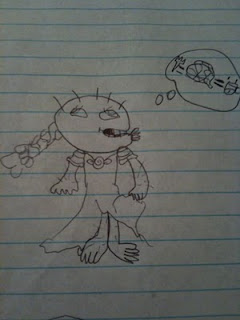 Angus tells me that before Cinderzombie became a zombie, she was a girl named Fred who was terribly ugly. That's why she had a beard. She had 2 beautiful sisters named Bob and Jerry and her mother was named Petunia. One day Fred made the biggest mistake in her life when she accidentally spilled mayo on Bob's shirt and Bob was so mad at Fred that Bob told Jerry and Jerry told Petunia and they were all so mad at Fred and made her do chores all day. One day there was a ball with a handsome prince named Prince Sally (I'm not making these names up - this is all from Angus). Bob told Fred she was too ugly to go to the ball. Which was true, but Fred thought Hey maybe the prince isn't so handsome. But then she saw a picture of Prince Sally and thought "Man is he cute!" So Fred thought again and just did chores and chores and chores and chores and chores...

Fred was crying on her staircase, if she even had one, and then Poof! the magic weasel named Weasel appeared. And Weasel was holding Fred on his lap but then Fred crushed Weasel since he was much smaller than Fred's butt. When Weasel could breathe again he said "I'll grant you any wish you want!" Fred said "I really want to go to the ball." And Weasel said "Uh, isn't there anything else?" Weasel slapped himself on the face and thought "Man this girl is hideous!" and wondered if he had enough magic to make her beautiful for the ball. But all Weasel could do was put her in a pretty dress, hairy legs, beard and everything.

Fred was so excited and went to the ball. At the ball, people fainted at how ugly Fred was but Fred didn't notice because she wanted to meet the prince. When she finally met Prince Sally, her approach chased away all the pretty girls who were hanging all around the prince. Prince Sally turned to Fred and said "Hey thanks a lot! You saved me from being bored to death! Do you want to dance?" The Prince and Fred spent the whole night dancing cause Fred's ugliness kept all the other girls away. But the Prince and Fred talked a lot because they had so much in common like their love of basketball and burping. And the Prince thought Fred was actually quite cute.

Then the clock struck midnight and Fred was going to run away, but then the zombie invasion occurred and everyone got turned into zombies. But Fred was quite happy to be a zombie because it turned out Fred was the prettiest zombie in the world.

That's actually quite brilliant! I laughed, and the story has a satisfying resolution, too.

Cinderzombie should be a book. Or a whole series of short stories. That's a great idea. If I only had time to do it.

my kids haven't gone to camp in 2 summers now. Puppy dog eyes for sure have gotten them out. We hired a full time sitter. She has worked out pretty well so far.

"But the Prince and Fred talked a lot because they had so much in common like their love of basketball and burping." LOL!

Your stories about your kids are hilarious!

Awesome story! I loved it. I totally agree with Charles that it would make a great picture book.

What a great little story. I love the ending where Fred was the prettiest zombie. Makes sense.

Sounds like your summer is in full swing and your kids are keeping you hopping :)

Wow! I bow to the creativity. I'm left speachless. Wowzobmie!!!!!

We do think that you too might have a marvelous story to tell, one that is your own! So if you can compose it in not more than few words, we would want to hear from you. Also, you stand a chance to get your story published on our site and win cash prize of USD 100.

“Then what are you waiting for? …put on your thinking cap and get writing. For registration and other information check - http://bit.ly/short-story-contest-2010

charming, to say the least :)