The Last Empress of Korea

One of my favorite parts of the writing process is the research process. I am a total geek at heart and I adore libraries. The best part about being a faculty member of a university is that you have a fantastic university library at your fingertips. It's like manna from heaven! So for the new WIP, I'm working on late 19th century Korea where the Hermit Kingdom was just beginning to open its doors to Europe and America, and the royal government was divided into 3 factions led by Queen Min, King Kogjong and the Daewongun (the King's father who had ruled as regent). These factions were split along pro-Japanese and pro-Chinese lines but it was the Queen's power that intrigued me the most.

Queen Min's life is one of those historical tragedies that had incredible significance in the world but remains largely unknown. There are many factors to it, the largest one being that she was brutally assassinated by the Japanese government who then did everything in their power to vilify her name and eradicate her contribution to history. They went so far as to destroy any and all paintings and photographs of the late queen. All that is left are a few photographs and paintings that may or may not be the queen. 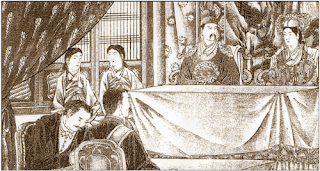 She was known for her open hatred and distrust of the Japanese, afraid that Japan was only out to conquer Korea and bleed it of its resources and people. She was right. But she was smart enough not to trust the Chinese either. Because she felt Korea was in a perilous position, she encouraged Russian involvement in Korea and opened the doors to the US and Europe. Although a devout Buddhist, she showed a high degree of religious tolerance which allowed a new wave of Christian missionaries access to the once closed country. This was in direct contrast to her father-in-law, the Daewongun, who killed thousands of Korean Catholics during his reign as Regent.

The king was a mild, kind man who was weak and ineffectual as a ruler. It was well known that the true power lay first with the Daewongun and then with the Queen. In fact it was the Queen who had the Daewongun removed from power. This led to years of assassination attempts that included an exploding box that killed the queen's closest relative, poison attempt of the queen, and attempted kidnapping. It wasn't until Daewongun collaborated with the new Japanese Minister to Korea that his assassination attempts were finally successful.

On October 8th, 1895, pro-Japanese collaborators allowed 50 armed Japanese men into the palace compound where they killed several women before dragging the queen into the courtyard, hacking her with sabres, sexually violating her, and then finally setting fire to her body.

There are many who speculate that World War II (at least on the Pacific front) might not have happened if the Queen had not been assassinated. It was her increasing encouragement of Russia that prompted Japan to have her killed. Had she survived and had she successfully manipulated the foreign governments interested in Korea, she would have kept Japan out of Korea and Japan would not have grown into the unchecked super power that it did. For when Japan colonized Korea, it took all of Korea's resources and sent it to Japan, enriching the lives of the Japanese while impoverishing the Koreans. (Much is made of the fact that Japan did help modernize Korea also, but a strong case could be made for the fact that such modernization would have occured naturally, like it did in Japan, with the opening of Korean's doors the international world.)

As you can see, I'm enthralled with this topic. It is this history that will play the background to my new speculative fiction WIP. I just hope that others will find this history as fascinating as I do. But one thing is for sure, I'm going to have a blast writing it!
Posted by Ello - Ellen Oh at 1:49 AM

That is a fascinating topic! : ) I love finding little snippets of history that hardly anyone knows about. Good luck with the WIP!

That's pretty cool. I'll admit I don't know anything about Korean history; it never came up in school, or any of the other regular channels here. :/

Why was the king's father the regent? Whom did the king inherit from?

What an intriguing historical figure. She reminds me of Hatshepsut, the female pharaoh who died under mysterious circumstances. After she disappeared, someone tried to erase all signs of her existence. And if you believe the theories set out in the Da Vinci code, a similar post-death vilification occurred with Mary Magdalene.

I look forward to hearing more about your book. Love historical fiction.

I'm glad you guys like it! I'm pretty stoked over it too! The idea I have is pretty wild and different so I'm keeping it under wraps for now but can't wait to see how it plays out.

Angie - the king's father was regent on behalf of the king when he was a young boy. The father couldn't inherit the throne - only the son. BUt as regent, he liked the power too much and held on to his position well into the marriage of the king and queen min. It's fascinating stuff!

The father couldn't inherit the throne - only the son.

Well, yes, I figured that much. [grin] I was wondering why. That's not how it's usually done in the west, and I was wondering if there was some other kind of dynastic inheritance scheme working in the east, or at least in Korea. Or whether something happened -- maybe the son inherited from his grandfather through his mother, or something like that. [ponder]

The story of Queen Min has always been intriguing. Korean history before the Korean War has always been a personal area of interest. So, good luck with this book! (Btw, what happened to the Seven Kingdoms trilogy?)

It's so funny having time to actually respond to comments today!! I like it!

Angie - So what happened was that the regent was a distant relation of the king. The previous king did not have any direct heirs. He took as his heir the regent's son who was 10 or so when he took the throne. So his father ruled as regent. Hope that clarifies.

imaginem32 - Thanks for asking about the 7 kingdoms! I finished revisions and it is currently with my agent. I'm hoping that it will be ready to go back out on submission this fall!

Aha, yes it does. Thanks!

Thanks for the introduction to this fascinating woman and period, Ellen. What an amazing, tragic story and what a fabulous setting for a novel. Fingers crossed for Seven Kingdoms this fall!

I love research too. What a great story. X'd that's my fingers for you.

Japan certainly had it's moments of empire building. Perhaps wise of her to be distrustful.

i'm always intrigued by other cultures... look forward to your books :)

Cool! I love research, though I don't have a university library at my fingertips. =)

Sometimes I think I spend too much time researching and not enough time writing.

What a fascinating historical figure. I had no idea! It's always fun to learn about something/someone/some time in history. Thanks for sharing this glimpse into the past.

Fascinating! I love learning about women in power. So glad you shared, and I'm looking forward to hearing more about your WIP. Wishing you many good writing days ahead!