The other day the girls were fooling around when Angus, the 9 yr old did an elaborate (and clearly staged fall) and then began to whine about hurting her arm.

I asked her why she was whining and she began to sob that it hurt. I took a look at her arm and couldn't see any signs of swelling, bruising, or even a slight hint of red that might indicate where an injury might be. So I gave it a kiss and pronounced that she would be all right. Angus began to complain vehemently that it really, really hurt. Youngest sat by Angus's side and patted her hand, trying to console her but Oldest stood over her and rolled her eyes. Since I was in the middle of making dinner, I told Angus to calm down and get up off the floor and put an ice pack on it if it hurt so much, and left her with the other two.

Later that night, I went to bed and found the following drawing, rendered on a piece of tissue paper, lying on my pillow: 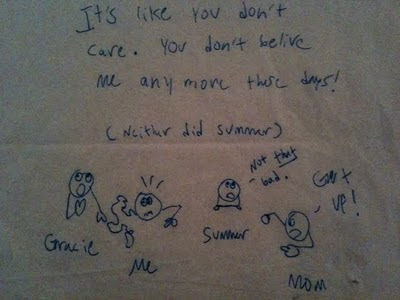 I guess I won't be winning any Mother of the Year awards, huh?
Posted by Ello - Ellen Oh at 12:15 AM

Ouch on more than one count.

that kid's got mad skills.

although maybe she should work on her acting?

I love her art 'tho.

And, she is a great graphic-novel protege ;)

Excellent economy of line! Love how she rendered her hurt arm as a squiggly thing and everyone is made up of a head w/ arms. lol

angus, nurture you creative talents, li'l one... you can become a great cartoonist!

Oh! I love the shape of her words and her drawings...I see an artist there. I really do.

Love the drama in her drawing!

Satta king
this is superb!!