I was completely out of ideas for a blog post when I asked the girls if they wanted to put something up. They made me take this picture and then made up a story to go with it. So here it is. An Oh girls original.
Ploppy the Penguin
By the Oh girls 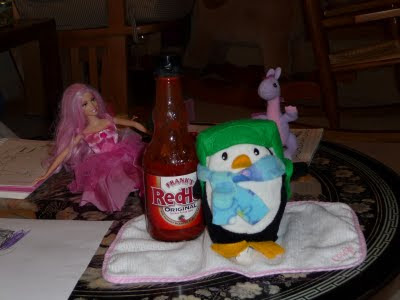 Once upon a time there was a little penguin named Ploppy. He had two friends named Pinky the pink mermaid and Penelope the purple dragon. One day Ploppy was thirsty and looked in his refrigerator but there was nothing to drink. Then he looked in his cabinet but all that there was was bags and bags of Funyuns and on the top shelf in the farthest corner there was a bottle of Frank's Red Hot hot sauce. So he decided to drink it.

At first he turned very pale. Then he turned bright red, then dark red, then red orange, then purple, green, blue and all the colors of the rainbow. His throat was burned and his tongue was on fire! He ran out into the snow and screamed "HELP!!!" Penelope the dragon and Pinky the mermaid were outside. Ploppy screamed "Help" again and fire shot from his beak. The fire burned off all of Pinky's beautiful pink hair.

Ploppy began gulping down piles and piles of snow until finally his throat no longer burned. He sighed in relief.

But Pinky was furious and hit Ploppy in the stomach with her strong tail.

Ploppy went "Ooooooof!" and then his stomach began to rumble louder and louder and faster and faster like a motorcycle. Then he said "Uh Oh!" Suddenly, the rumbling stopped and a humongous fart blasted him into the air, melting away all the snow, and burning off all of his feathers.

Pinky was satisfied and jumped into the ocean, away from the terrible smell. Penelope caught Ploppy before he hit the ground and took away his bottle of Red Hot hot sauce. Because only dragons should be allowed to breathe fire.

Talented children you have!
And I just KNEW there was going to be a fart in the story! :)

Great, now I have this insatiable craving for Funyuns.

Pretty good! The OH girls sounds like a singing group!

Clearly writing runs in the family. Along with an irrepressible sense of humour. :-)

This could be bigger than Scooby Doo...

The last line is hilarious! Kudos to your girls ;).

Love it!!! And see how well you are raising them...they built in a little lesson too. ;)

You should totally send this to publisher's or include this into school's course book.

ohmygosh i am literally crying with laughter :D your girls are HILARIOUS

Your girls are awesome.

Thank you everyone. The kids have been jumping up and down exclaiming that "Now we're going to be famous!"

I think they meant infamous. ;o)

Ahahahahahahaaaa! Do you have a photo of the burned Ploppy?

Are your cupboards really filled with Funyuns and hot sauce?

Your kids must love your stories. Anything involving a fart gets an instant clamour of delight here. :O)

definite storytellers you have there, el...

Great story. And I am now desperate for Szechuan chicken.

I like 'OH Girls' too -- sounds chemical, but in a nice way.

Awesome! I wrote a bunch of stories when I was a kid. Some of them are still lying around my parents' house.