The Magical Misadventures of Prunella Bogthistle

Hi everyone who reads my Mom's blog! It is Oldest again with another author interview. Since my Mom is an original member of the Enchanted Inkpot, she has a whole lot of author friends and one of them is one of my favorite authors. Ok, actually many of them are my favorite authors, but today's interview is with Deva Fagan, the author of Fortune's Folly and her latest book The Magical Misadventures of Prunella Bogthistle.

Fortune's Folly was one of my favorite books ever. But now I love Prunella just as much. What I loved about the book is that the main characters, Prunella and Barnaby, are not your regular fairytale characters. She isn’t a beautiful princess – she’s a young bog-witch. And he’s not a handsome prince. Well, he’s handsome, but not a prince. She’s an evil witch who’s not evil and he’s a hero who’s not really a hero. This book is magical with tons of excitement and unexpected twists in the story. I loved it and I think more people need to read it! Plus it is one of the prize books that is being given away right now at the Enchanted Inkpot! Go here for a chance to win Prunella and many many more books! (My Mom made me say that.) 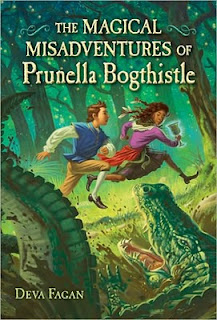 Oldest - Hi Ms. Fagan! Thank you so much for letting me interview you.

DF - How in the world did you come up with such an interesting character like Prunella? And why did you choose a bog-witch as your main character?

In the original version of the book, Barnaby was actually the main character, and Prunella was a secondary character he met along the way. So in many respects she came to being as his opposite—someone who would challenge his expectations and behaviors. So since Barnaby was a dandy, Prunella was practical in her clothing choices. Barnaby cared what people thought of him, so Prunella didn't (mostly!). Barnaby was charming, Prunella was prickly.

But I think the very earliest seed of Prunella probably came from my love of the musical WICKED by Stephen Schwartz and Winnie Holzman, loosely based on the novel by Gregory Maguire. It's one of my all-time favorite stories, and I just love the complex character of Elphaba the "wicked witch" and, especially, how she grows and changes due to her unlikely friendship with "good witch" Galinda. I didn't realize it at the time, but now that I look back I can see how those same themes must have resonated with me and inspired some of the themes in Prunella's story: what does it mean to be "good" and how do our relationships with other people change who we are?

Oldest - And what about Barnaby? why did you decide to make a thief your hero?

Barnaby Bagby was primarily inspired by a character my own husband Bob played in a roleplaying game: the youngest of a clan of ne'er-do-well brothers who ran away to become a hero. Fortunately when I asked if I could use a version of the character in my book he said yes!

Of course there are many wonderful thief-hero characters in fantasy (including the ever-popular Eugenides from Megan Whalen Turner's Attolia books and Con from Sarah Prineas's Magic Thief series). I think a lot of us enjoy the idea of a wily character who is capable of doing bad things, but chooses not to. If you're capable of stealing the greatest treasure in the realm, for example, what do you do with
that power? Do you use it just to become rich, or do you attempt to make the world a better place?

DF - What were some of the challenges that you faced in writing this book?

The biggest challenge was having to throw out the entire first draft! Eep! I wrote an entire first draft from Barnaby's point of view, but it just wasn't working. In that version, Barnaby was more of a hero right from the start, so there wasn't enough change and conflict. Plus it had an overly-complex, tangled plot, and too many characters were caricatures rather than real people. In the end, after a talk with my agent and spending several heart-wrenching days huddled in a teary lump, I decided that first draft was too badly flawed to revise. I had to throw it all out and start over.

It was one of the hardest things I've had to do as a writer. Sure, I'd thrown out entire books before, but this was one I'd already sold. It was February at that point, and the book was due to my editor in August. Worst of all, it was a blow to my confidence: I began to worry that my first published book, FORTUNE'S FOLLY, was a fluke. I wondered if maybe I just didn't have another book in me.

But when I finally pushed aside my fears and sat down to start the new version, from Prunella's point of view, it all started to flow. Prunella was such a fun character to write about, and seeing Barnaby from her perspective gave me new insights into his character too. I am so glad I didn't give up! In the end I wrote a new draft that was almost completely different from the first, but I felt so much better about it!

Oldest - One of my favorite parts was when Prunella saves the town and townspeople, even though they were set on burning her. And I really liked that Barnaby also got them all to realize that Prunella was a hero too, even though she was a bog-witch. I thought this was a really good message. What is your favorite part of the book?

I'm glad you liked that part! That was actually one of the sections that my editor and I worked hardest on, because it is a big turning point for Prunella. So I have a soft spot for it as well!

My favorite parts to actually write were all the bits that feature the spooky monsters and weird flora of the bog. I had a lot of fun creating the menagerie of weird creatures that inhabit the Bottomlands, and I also really enjoyed trying to find the beauty in it too. Prunella really does love her home, no matter how much Barnaby complains about the mud! It was an interesting creative project to try to create a place that could be both creepy and beautiful.

Also, I must admit that I enjoy writing food scenes! Even though they make me hungry!

DF - There are so many wonderful characters in your book, like wights, will o wisps, jacks, etc. One of my favorites was Pogboggen the Pondswaggle. Did you create him or is he a real monster?

I created him -- actually, he is a refugee from a book I wrote ten years ago that I've put in my trunk. Since I don't plan to ever try to revise or publish that book, I decided to give Pog a new home in Prunella's world. And that's one of the nice things about writing: nothing is ever wasted. It all helps you grow, and even if you set things aside, you can keep bits of them with you, to be reborn later in new worlds.

Oldest - What kind of research did you do for your book?

I always envisioned Prunella and Barnaby's world as being a little like the American south (especially the Louisiana and the Florida everglades) so when I was writing it, I surrounded myself with a lot of pictures of the flora and fauna of those areas. For example: pictures of alligators, paddleboats, wrought-iron balconies in New Orleans, saw palmettos, swamps and bayous.

But it is first and foremost a fantasy setting, so a lot of the "research" was delving into my own mind to fill in the details of the world.

DF - There was so much good stuff in your book that I was wondering if you had lots of stories that didn’t make it into the final draft. Maybe a whole other book of legends and myths of the Uplands and Bottomlands. Am I right? And wouldn’t it be great if you could publish such a book? Hint, hint…

I'm so glad you enjoyed the hints of the underlying legends and myths. I do indeed have a bunch of notes on the history of the Uplands and the Bottomlands (and beyond!), which I needed to write down since (as you know) a large part of the book involves Prunella and Barnaby unraveling the true history of their land.

There are also many aspects of the world, and of the characters themselves, that I would love to explore further. There's a sunken citadel out in the bog that I never got to write about, for example, and there's those mysterious Palm Islands with their haunted ships and kraken. Plus there are elements in the characters' lives waiting to be explored: Prunella's parents, Barnaby's brothers, Rencevin's history.

Oldest - I really loved Prunella and Barnaby? Will you write another book for them?

DF - I would love to-- in fact I have outlines for other books about Prunella and Barnaby sitting on my computer. But whether I get to write them and publish them depends on how well this first book sells. And as of now I'm afraid it's not enough for the publisher to be interested in a sequel. But we can keep our fingers crossed!

And I do have another new book on the way in the fall of 2011, though it's set in a different world, with different characters. CIRCUS GALACTICUS is the story of Trix Ling, an Earth-girl who runs away to a life of adventure and danger as part of an intergalactic circus. I had so much fun writing it! It combines a bunch of my favorite things: adventure, mystery, sequins, ice cream, stars, and dashingly cute alien boys.

Thank you so much for the wonderful questions, Summer! And thank you for hosting the interview, Ello! Happy reading!

Oldest - Well you heard Ms. Fagan! Prunella needs help! Please go and buy this wonderful book because you won't be disappointed! And enter the Enchanted Inkpot contest, because my Mom said so!
Posted by Ello - Ellen Oh at 11:35 AM

Wonderful interview Oldest! I think you should get college credit...Mom, can you see about that?

And, I love the names of those characters. I'd have to love people with such unique names, even without reading the book.

You know, this sounds really good to me. Although I'm way past the age of young adult, I still crave this kind of adventure. I'll check it out.