Hi everyone! Have you missed me? I'm still not back but had to break blogging hiatus for another random kids day. 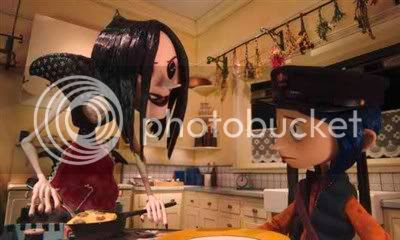 The girls have watched Coraline for the 10th time and were talking about the movie while I was driving to Krispy Kreme for an emergency donut run.

Oldest - So if the other mother kidnapped our parents what would you do?

Youngest - I would grab her arms and bite her really hard.

Angus - You can't! Her hands were made of metal and her arms are real skinny. You'd break your teeth!

Youngest - I would kick her in her butt!

Angus - Well I would bring Daddy and a nose pin. And then I would aim Daddy's butt at the monster and put on my nose pin. Daddy would fart aaaaaaannnnnnnd. The. Monster. Would. DIEEEEEEEEE!!!! Dun dun dun.

Oldest - But Mom and Dad would be kidnapped by the monster!

Angus - Oh yeah! Well I would poop in my pants and then I would take off my poopy pants and throw it at the monster's face.

Oldest - You would be half naked!

Youngest - I have to poop now.

One of these days I've got to record them secretly. I can't really capture the true essence of how funny they are by words alone.