1. “Life in Mono” By Mono - This is one of my favorite songs and for some reason it was the tune that always came to me when I thought of my main character, Kira. When I was working on her scenes, trying to figure her out, I’d literally hear this song in my head. So I just started playing it all the time and Kira came to life. I find it perfect for her because it’s a melancholy piece—sad and lonely, but still filled with hope. Kind of like Kira.

2. “Voices Carry” By Til Tuesday - There’s this scene in PROPHECY where Kira has to walk by all of the court ladies and they flick open their fans in front of their faces and just whisper. And I remember immediately hearing this song in my head as I envisioned this scene.  Particularly that one refrain at the end - “He said shut up, he said shut up. Oh God can't you keep it down! Voices carry.” And I thought that this would be what she was thinking in her head as she walked past them and had to hear once again all their mean taunts.

3. “King of Sorrow” By Sade - This song is Jaewon. He is the King of Sorrow. Just look at these lyrics. “I'm crying everyone's tears, I have already paid for all my future sins. There's nothing anyone, can say to take this away. It's just another day and nothing's any good.” He has had so much pain and suffering in his young life. This is what he feels like everyday.

4. “Gimme Shelter” By The Rolling Stones - When Kira and her group are on the run, I would hear the Stones in my head. If I were a movie director filming this scene, this is what would play in the background. I think there is something epic and almost western sounding about this song, which works when you’ve got horses and danger and a demon army hunting you down.

5. “Pray” By Sunny Hill - Pray is a gorgeous K-pop song with one of the most bizarre music videos I’ve ever seen. It actually gave my kids nightmares. Seriously, don’t watch it. It’s freaky. But the song is beautiful and kind of heartbreaking. One of the chorus lines reminded me of a part of my book where Kira sheds tears for the souls of the unfortunates she needs to save. “Cry for me, and I'm sorry. It's not fair for me to put you through my sorrow.”

6. “Sweet Sacrifice” By Evanescence - Whenever I had to write a battle scene, I cranked this song. LOUD. There’s this one perfect line in the song that just resonated with me so much. “Fear is only in our minds but it's taking over all the time.” Yeah, that one.

7. “If” By Janet Jackson – “If” is definitely Shin Bo Hyun’s song. Because there’s something sexy about that bad boy and without a doubt, this is a sexy song.

8. “Get It In” By Yoon Mi Rae – This is a badass song. It has a badass video. Kira is a total badass. Enough said. Here’s the link to the video. Although it is mostly in Korean, there is an English version of the song. Warning: the video is violent.

9. “Rocketeer” By Far East Movement - Love this song! When it came out, I’d have it on repeat pretty much all day long. I adore Ryan Tedder’s voice.  But my favorite part of the song is when they sing and rap “Let’s fly-y-y-y! Up up here we go, where we stop nobody knows.” To me, it’s kind of a perfect ending anthem for Kira.

10. “Rabbit Heart” By Florence and the Machine – I love this song and it really fits PROPHECY because even the bravest people will have moments where they are filled with fear and doubt. Not that Kira was ever a “rabbit hearted girl” but like the lyrics, she “must become a lion hearted girl, ready for a fight, before I make the final sacrifice.” Well in her case, more of a “tiger hearted” girl.

11. “May” By Belle Epoque – This is a K-Indie song from the soundtrack of the Korean hit drama Coffee Prince. It’s a thoughtful song, one I liked to play a lot while just staring blankly at my computer. I like to call this my thinking song! But it also has some lovely lyrics. “Even that dream we shared, shy words exchanged, those dream-like days are over…”

12. “The Kiss” By Trevor Jones from The Last of the Mohicans Soundtrack – Music and writing is all about mood. I am such a visual writer that scenes come completely to life in my head before I write them. But they aren’t silent. I’m never quite sure what the music might be, but I know the mood, in fact I can hear it. And to me, music is always about enhancing the mood. The Last of the Mohicans soundtrack, and this particular song, does exactly that. It envokes an emotional response that I tend to equate with Prophecy.

My Week in Gifs

After a string of particularly bad reviews:

Reading the one good review that comes your way:

And then you get fan mail from someone you don't know who says they love your book:

With more Prophecy ARCs out in the wild, I've been seeing increased confusion about the use of Korean honorific terms. Specifically, the lack there of in my book. And I thought this would be a good time to discuss the complexities of the Korean language.

The current version of the ARC was printed before final edits. It contains the use of the honorific (-shi) which is used at the end of a person's name when speaking to people of equal rank. It won't be in the final version because I realized that this was a modern use of the term that evolved and would be incorrect for ancient times. So Prophecy is limited to a few titles and the use of a full name of a lord who is of equal standing with my main character. This limited use is very purposeful. Korean is a very challenging language to master because of the use of highest form, high form, and low form. This is how the honorifics are actually built into the language itself. It is very different from English where you formalize by adding a Mr. or Mrs. or using sir or madam. Learning all these levels of honorifics is extremely tricky. I'm Korean and I still get it wrong.

The most important thing to remember is that Koreans don't tend to call people by their first name. They call people by their full name, last name first, even if they are good friends. Furthermore, where an honorific can be used, it is much preferred: for example - the older brother/cousin of a young girl is called Oppa, the older sister/cousin of a young boy is called Noona, teachers are always seongsengnim, older married women are ajumma, older school or work friend is sunbae, my aunt on my mother's side is called emo and my aunt on my father's side is called komo but my uncle's wife on my mother's side is called sumo and my uncle's wife on my father's side if he is older is called Kun Omma (big mama) and if he is younger is called Chagun Omma (small mama). Let's say you are friends - if you are married with kids, you might be referred to as so and so's mother or father. Again, avoiding actually calling anyone by their name is considered polite. And when you do use names, you use their full name. So my Mom would be called Ellen Omma by her friends. And all old people are called halmoni (grandmother) or haraboji (grandfather). If you are starting to get confused, then you have an idea of just how overwhelming this all can get.

Now if you are a fiction writer, how do you deal with all these honorifics? Do you use every single one no matter how complicated the relationship? No. You use a few that make sense and you try and formalize the rest because otherwise you will completely lose your reader in the complicated maze that is Korean honorifics. Even the translators of K-dramas don't try to keep up with translating all the honorifics. It is just way too complicated, so they simplify as much as possible. And please know, I haven't even discussed how to use the different forms, highest form, high form, and low form. That will have to be a lesson for another day.

So if any of you read Prophecy and wonder why there aren't more Korean honorifics in it, please think of this post and realize that it really was for the best!
Posted by Ello - Ellen Oh at 12:22 PM 5 comments: 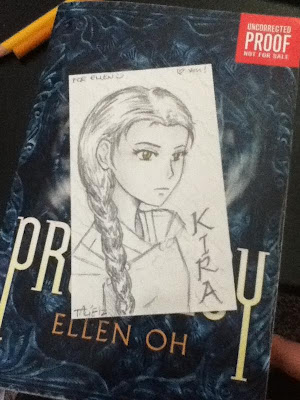 The lovely and amazingly talented Natalie Whipple created this gorgeous piece of fan art of Kira for Prophecy. It's brilliant, beautiful and absolutely perfect!!! These are the things in life that can make a person so very happy.

For Halloween, my little nephew was Batman. This is him checking himself out in the mirror and then giving himself a thumbs up! So hilarious!!!
Posted by Ello - Ellen Oh at 2:57 PM 7 comments: