By special request - another Mother story.

One day my Mom and I were having lunch when she keeps staring at my chin.

"I see a double chin," Mom said. "You'd better start exercising again." Visions of jumping in the air and smacking myself on the chin fleeted through my head.

"But not brownies, cookies, chocolate, or cupcakes," she said as she pointed to my pantry. "Double is bad. Double chin, double belly, double self. Everything double is bad."

"I'm not! Double patties, double chocolate, double by-pass heart surgery, double trouble. See? Everything double is bad. One day your husband will look at you and think, hmmm, I need a new wife. That would be double wife. That's bad."

She nodded sagely. "Double standard. I told you everything double is bad."

Last time my Mom was visiting, I walked in on her in the living room acting strangely. She was reaching up high with one arm and jumping in the air. As she landed, she'd smack herself on the head and continue to reach and jump. After 10 jumping head smacks she switched arms and did it 1o more times.

So I had to ask her.

"I'm exercising," she said as she moves on to her 30th jump smack.

"But why are you jumping and hitting yourself?"

"I am reaching high and jumping to stretch out my stomach because I ate too much today. And I'm hitting myself on the head to remind myself not to eat too much again." She doesn't even stop as she explains this to me. "If you do this too, you would stop eating all those sweets right away."

"If I did that everytime I ate something bad I'd be in a coma," I said.

"That's why it works," she insisted.

Recently Angus had a basketball game that didn't go so well. Da Man is coaching her and it is her first season with players who had never played before either. So it is a newbie third grade team. They played a team that had been playing since kindergarten. It was a massacre. The final score must have been 45 to 12 or something painful like that. During halftime, the scorekeepers in an act of mercy wiped the scorecard clean and kept tally privately instead. It was in the second half that Angus and her teammates got a little bit livelier and scored 12 points. The scorekeepers put the 12 up but kept the other teams score at 0, which surprised me and ended up confusing our players.

The coach for the other team, a really lovely and gracious coach, kept calling out to her players to let our team take shots. Plus overall, I thought her players showed excellent good sportsmanship. I applaud coaches like her, and Da Man, - they are few and far between.

But the reason for the story is afterward, Angus came over and said "Did you see Mom? We got 12 and the other team didn't get any points in that second half!"

I corrected her and told her that the other team had actually scored also, but the scorekeepers hadn't added it to the scoreboard. Angus was disappointed.

Another mother overheard me and admonished me. "You shouldn't have told her that. Let her believe that they did well."

I was a bit surprised. "But they did do well. And I'm not going to lie to her."

"You're a bit too harsh," the other mother said. "I would have just let her believe it so she still feels good about it. Now you've made her depressed."

I made a non-committal response and left but I thought about this for a long time. Did I do wrong? Should I have let Angus continue to believe that they had dominated the other team and kept them to 0 points when in fact the other team had outscored them again in both halves?

My gut screams no. First because it is dishonest. But secondly, because I believe this is a form of coddling that I just can't agree to. It's like giving awards to every team that plays, even if they didn't win. Personally, I think it is bull, but I can live with it. I'm of the old fashioned viewpoint that if you win, you get an award, and if you lose you get a hug and you go out to buy ice cream as a consolation prize. I applaud effort and I believe it is important to encourage effort, but don't reward it because then I feel you are just pushing for mediocrity. A sense of "well I tried and that's good enough." Yes and No. Try, and keep trying, and maybe one day you will succeed. And when you succeed, you'll be rewarded. That's life. To teach our kids any differently is to set them up for enumerable heartache.

Hey guys, I admit that I am not a good blogger lately. I feel that it is the lack of donuts that is causing me to be such a poor internet presence these days. I am just so weak these days. But I do have a bit of a scoop that I want to share with you. I have an interview up with the fabulous Stacy Whitman, editor extraordinaire, founder of Tu Books, an independent press focusing on multicultural fantasy and science fiction for middle grade and young adult readers, over at the Enchanted Inkpot. Tu Books has now been acquired by Lee and Low Books!

I'm really proud of Stacy. She started an independent press because she saw a need in the marketplace for multicultural books for children. She started it against all odds, willing to make lots of sacrifices to make it work, and now all her hard work has paid off and Tu Books is now an imprint and Stacy is the Editorial Director! Instead of just 2 books the first year, she hopes to publish 6 titles in 2011!

So please check out the interview and let me know what you think of this new publishing endeavor. 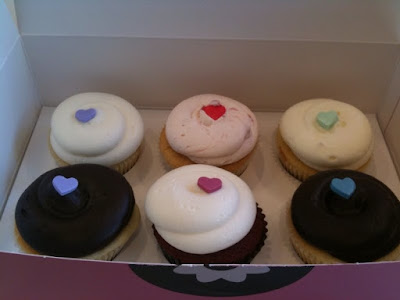 Since giving up donuts for Lent, I've found myself craving sweets like a Pavlovian dog hearing a constantly ringing bell. I go to bed thinking of sweets, I sleep and dream of sweets, and I wake up craving them. There has been only one thing that has satisfied my sweet addiction. And that is a red velvet cupcake from Georgetown Cupcakes. 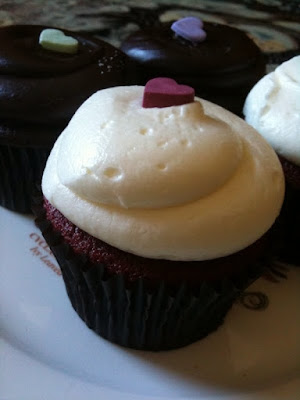 So luscious, so sweet, so decadent, so creamy, so drool slobbering, fever inducing good. If I had to choose between a red velvet cupcake and a date with Clive Owen, I'd slide tackle Clive aside in my rush to cram the cream cheese icing into my mouth. I'd run over Hugh Jackman, shove Brad Pitt, and stampede over Johnny Depp. Errrrr, wait a second. Rewind. Who in their right mind would choose a cupcake over Johnny Depp? Thinking. Thinking. Thinking. Sorry Johnny. I gotta go with the cupcake.

FYI, if you are in the DC area and you are near a Georgetown Cupcakes, then follow them on twitter here because everyday they have a secret cupcake flavor. They make about a 100 of them. Once they tweet the secret flavor, rush over to your local Georgetown Cupcake, tell them the secret favor and you get that cupcake for free, no purchase necessary. But why would you go to a Georgetown Cupcake and not buy a red velvet? That's kind of like sacrilege you know.
Posted by Ello - Ellen Oh at 7:30 PM 20 comments: