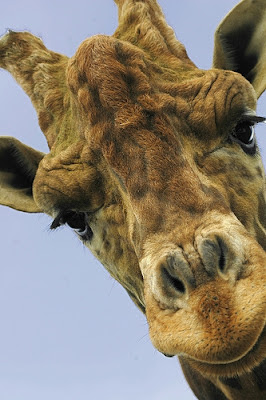 Hey, are you looking at me?

Do I know you?

You look very familiar to me, where have I seen you before? Oh yeah! At the supermarket yesterday, you were on line, a little in front of me. It was the express lane. You know, the one that says ten items or less. How could I forget you? You pushed in a huge cart filled with stuff and when the cashier asked you to go to another lane because you were clearly in the wrong lane, you completely ignored her and continued to unload all your items. And when she insisted that this was the express lane for ten items or less only, you told her to ring your groceries up separately so the poor woman was forced to ring you up five separate times. I watched the professional way you condescended the poor cashier, reminding her that you were the customer and she had no right telling you what to do. You have a talent for making people feel small. The regular lanes were moving faster than the express lane was. And when the woman behind you complained, I remember now how you called her a nasty word and told her to do something terrible to herself.

Yes, yes, I remember you. When I finally got my three items rung up, I saw you unloading your fifty bags of groceries into your huge black Mercedes M-class SUV. After you slammed your door closed, you just shoved the shopping cart away from your SUV so that it rolled and crashed into the front bumper of a nearby minivan. I followed you out of the parking lot and watched you make a phone call while pulling out of the lot into oncoming traffic very slowly, causing the oncoming traffic to slam their brakes and cause immediate gridlock. I saw you cross three lanes of traffic without using your signal or turning your head. Out of curiousity, I followed you and saw you pull into another nearby shopping strip mall where you then proceeded to drive right through crosswalks where people, whith children, had to jump back, even though they had the right of way, as you continued down your demented way, still blithely talking on the phone. I saw you pull into a spot and park your car very badly, encroaching into the next spot so that only a motorcycle would be able to park next to you. You got out of your car with your expensive prada bag and your tight short mini skirt, about 25 years too young for you. Your dyed blonde hair in sexy waves around a face that was more a tight mask of sharp discontent. You walked into the Elizabeth Arden Red Door Salon, the black roots on your head a clear indication of your intent.

I hope you enjoyed your pampering. But know this, karma is a bitch and one day all that you send out into the world will return to you tenfold. And while you look in the mirror and believe that you see this: 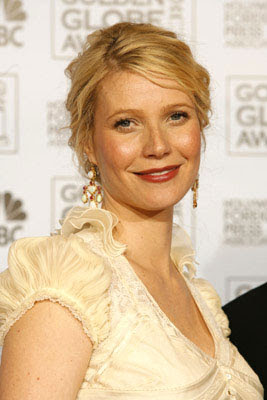 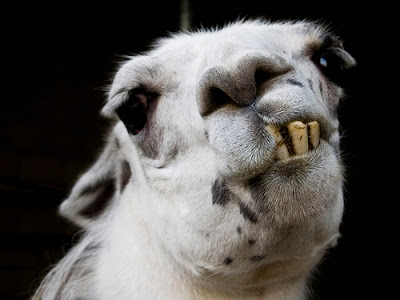 You followed a llama today?!

Nail her to a damned cross. I loved it!

HA! that was great - i'm afraid these people are everywhere...

Good grief. People like this need to be brought down a peg or two. I kept hoping you would confront her! I would have been hard pressed not to.

Love what Bernita said! I'd have been so tempted to go and spit on her door handle, run a nail file along her SUV, or let the air out of her tires. Like Melissa, I kept hoping you would confront her. I would have -- in my dreams, that is. Sadly, people like this tend to be formidable opponents who only accept criticism from fellow bitches-in-arms.

the rally monkey has a poem about this. i will induce him to post it, i think, in homage to you and your tale.

also, just to play the devil's advocate, i think that second picture of the villain is kind of cute. humm.

I just vomited in my mouth a little. Don't worry, I swallowed it.

Unfortunately that makes up 50% of NYC's population of women. And men for that matter.

Ha ha ha ha ha! I laughed so hard at this post -- the pics made it so wonderful!

Have you ever thought of going "YouTube" or adding video rants to your blog? I'd love to hear you saying this stuff!

omg, i hate people like that. she should have been thrown out of the store. what a fucker.

Wow! I am lucky to have never seen anyone so abuse the 10 items or less line. I thought those were sacred.

People like this really make my blood boil. I'll tell you what, though, if you treat people like this your whole life, it eventually comes back to bite you. We can all just hope we're there to witness it.

Bernita topped your rant off, Ello, because that's the only other element missing here. OTOH, we all know she does have her own problems...serious ones!

I bet the person this was about felt a strange shiver creep along their spine just around the time you hit 'Publish.'

Um, sorry and everything, but I WAS in a hurry. Geesh.

So funny, Ello! I just love your posts.

Great post. My god where do these people get off? How can they possibly be so oblvious? This is just downright evil, if you ask me.

You really, really followed that beeotch around? A nice keying would have topped up her day.

A quick return here to let you know I've tagged you, Ello, with a different kind of meme. Please see my Wednesday post.

Great pix and so true!

She probably thought you were one of her admirers following her. People like this have no concept of kindness or courtesy. It really makes me wonder how her parents could have raised such a clueless bitch.

I really believe that people like this have to be miserable to act this way... that they have a shallow and unfullfilled life... hopefully all her frozen food melted on her fine upholstery while she was in the beauty shop anyway.

The ending photo was so "the cherry" on top of this post. I just wish I had an "off my planet" button that would make people like this go away.

In Hungary, there are no 'express lanes'. You just have to wait. Pffft.

Re: woman in SUV - for a second I though you were following G.P. the actress on the photo. Then I laughed out hard :))))