What Diversity Means to Me - Featuring Mike Jung


First of all, thanks to all the wonderful comments on my first Diversity series post. There is still time to win a copy of Danette's book. Please leave a comment on Danette's post to win a copy.
When I started this blog series, I knew I would have to ask Mike to guest post for me for a few reasons. First of all, he is one of my ninja critique buddies. Second, my daughters began the first chapter of the Mike Jung fan club last year and at times seem more excited about his book release than mine (ahem!). Lastly, he has a fabulous middle grade book coming out this fall. And right on the cover of his debut book is his main character, Vincent Wu, an Asian American character. I remember cheering loudly with my three daughters when we first got a peek at Mike's cover. 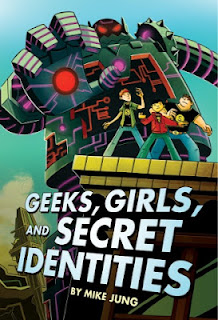 As much as I wish I could offer a copy of his book at this time as a giveaway, Mike's book is not out yet. Which means you'll have to wait until October when I will be having a giveaway. But in the meantime, I can tell you his book (which I've read) is laugh out loud in hysterics funny and touching and sweet and just wonderful. So I take great pleasure in letting Mike take over the blog today. 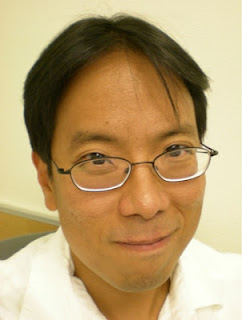 Awesome post Mike. Your book sounds like a fun read kids (and me) would enjoy. I so agree that kids just need to see themselves in stories and that the story doesn't have to focus on racial issues.

My daughter is adopted from China and I wish there were some books with main characters who were adopted (not orphans that she must always see) where adoption isn't the focus. Sadly there isn't anything out there for her yet.

I love that your book has kids who are half Korean, but it isn't ABOUT being half Korean. It's just about normal life! Well... normal life with super powers and robots :) I bet your daughter is so, so proud of you. Cant' wait to read Geeks, Girls, and Secret Identities when it's released!

My fourth-grader goes through books faster than I do. But in all those stories, I don't think he's found a main character that looks similar to him (he's half Chinese-Indonesian). You have no idea how excited I am to buy your book and give it to him this fall. Not just because there's an Asian kid on the cover, but because I'm sure it'll be a fantastic story as well.

Will definitely get this book for my boys--who are both half-Koreans but rarely remembers this fact. My first grader was slanting his eyes back with his fingers saying he was pretending to be Chinese. I reminded him that when he does this, he's making fun of himself!

Thanks everyone! I hope my future readers (however many of them there may be) will like the book and enjoy reading it. Thank you all for sharing your stories, it's very meaningful to me to hear then. And yes, AALB/Scholastic really did a fantastic job with the cover, which was illustrated by Mike Maihack and designed by Phil Falco.

Hmmm ... I posted earlier but it's not there now. Anyway, I just wanted to say how much I enjoyed reading this. Also, I can't wait to read GEEKS!

Thanks for sharing with us, Mike!

Thanks, Mike, for sharing your book with us. While I mainy follow China and next week will do a blog about American Chinese authors, I enjoy listening to songs from Korea. My favourite now is by Hyorin. Best wishes with your book.

Glorious indeed. I teach in a rural area, and though racially the kids are mostly the same, they are not reflected in the media, unless they're being made fun of. It's so important to give kids reflections of themselves within a broader world. Kudos. Look forward to your book's release date.

This book needs to be here already! Great post.

Wonderful post, Mike. My children are growing up in a very diverse international community where *they*, as caucasian fourth-generation Americans, are the minority. I believe this is wonderful for their world view and I am so proud of our neighborhood. We celebrated just the other night with "International Night" at the school where parents from various countries made displays of their homeland and brought ethnic food to sample. The kids performed international dances from China, Italy, Africa, and many other countries. It was a celebration of our diversity and also of the things that unite us.

Can't wait for your book. I have been waiting for a LONG TIME and now it is closer than ever. Bravo!!!

Mike, what you say about complexity, affirmation, etc. -- so very, very true. I can't tell you how much I am anticipating this book! You're wrong on one count, though -- I firmly believe that it will change many worlds. You already have.

Fantastic post! I love how your characters are a mix of ethnicities and sometimes that's harder because there is that feeling of disconnect. Who am I really? Where do I belong to? I think more and more we will see kids struggle with those issuse and you are paving a way to help make sense of that.

I also love it that the ethnicity isn't the sole issue of the book. That it's just a part of who makes that character. It really allows us to see that heros and heroines are all ethnicities and that is normal and good.

Helping kids find their place in the world! Isn't that what it's all about?
I am really looking forward to your September release, Mike and I wish you much success!

Mike, as usual, you manage to blow me away with your thoughts on a topic. Well said! And I can't wait to read GEEKS, GIRLS, AND SECRET IDENTITIES!

BTW, Of course your book is important! Funny, adventurous books are so important!!! Not everyone can handle a serious book, but put a serious subject in a funny book and it just might have the effect you talked about at the end:

"As a result, this terribly lonely boy, who's always believed that the world has no place for him, starts to believe that maybe it does have a place for him after all. "