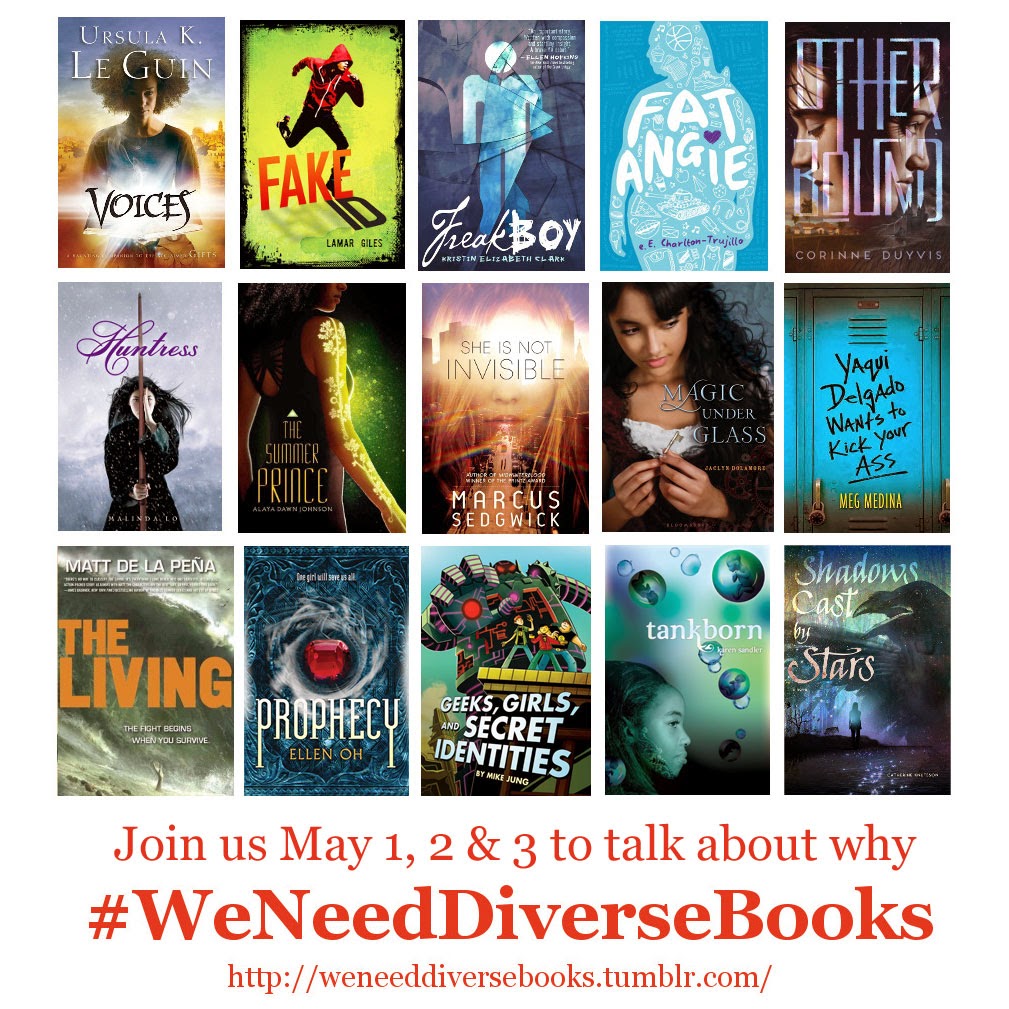 Recently, there’s been a groundswell of discontent over the lack of diversity in children’s literature. The issue is being picked up by news outlets like these two pieces in the NYT, CNN, EW, and many more. But while we individually care about diversity, there is still a disconnect. BEA’s Bookcon recently announced an all-white-male panel of “luminaries of children’s literature,” and when we pointed out the lack of diversity, nothing changed.
Now is the time to raise our voices into a roar that can’t be ignored. Here’s how:
On May 1st at 1pm (EST), there will be a public call for action that will spread over 3 days. We’re starting with a visual social media campaign using the hashtag #WeNeedDiverseBooks. We want people to tweet, Tumblr, Instagram, Facebook, blog, and post anywhere they can to help make the hashtag go viral.
For the visual part of the campaign:
On May 2nd, the second part of our campaign will roll out with a Twitter chat scheduled for 2pm (EST) using the same hashtag. Please use #WeNeedDiverseBooks at 2pm on May 2nd and share your thoughts on the issues with diversity in literature and why diversity matters to you.
On May 3rd, 2pm (EST), the third portion of our campaign will begin. There will be a Diversify Your Shelves initiative to encourage people to put their money where their mouth is and buy diverse books and take photos of them. Diversify Your Shelves is all about actively seeking out diverse literature in bookstores and libraries, and there will be some fantastic giveaways for people who participate in the campaign! More details to come!
We hope that you will take part in this in any way you can. We need to spread the word far and wide so that it will trend on Twitter. So that media outlets will pick it up as a news item. So that the organizers of BEA and every big conference and festival out there gets the message that diversity is important to everyone. We hope you will help us by being a part of this movement.

Bravo to Ellen for starting this initiative! I am mindful of the many subtle messages books can deliver to children, especially so since adopting my daughter from Vietnam when she was three months old (she is now 16). Even the preschool set needs stories that that support and affirm diversity and positive self-image from a very early age. I was extremely gratified at the way Anna Brown conceived three different animal families (in a natural palette featuring gray, russet, and dark brown) to illustrate my most recent picture book, LOVE IS REAL (HarperCollins,2014). The book does not reinforce any particular family, racial, or ethnic configuration or dynamic. The text and the beautifully drawn families of animals show how “little things” every day make a difference, and how different families spread love within their own unit and beyond.

Ellen’s initiative has been thoughtfully planned to raise awareness at key access points to literature—bookstores and libraries—and to help stock shelves with literature that offers more opportunities for readers to “see themselves” in stories they read, from preschool to YA. My hope is that Ellen’s efforts will snowball—so that more readers who “see themselves” will someday create their own stories that we can find on the shelves alongside ours.

There are often specialists available to get you learn how to use the tool quickly.You should also ask if there are any handouts available that gives tips on what you can do with the tool. satta king

play bazaar
satta king If you are unfamiliar with the area you are camping in or if you are in a wilderness area, do not stray too far from your campsite.

The credit departments are anxious to order your letters and course them to computerized reactions. This procedure is much simpler on the off chance that you send them printed material. Written by hand letters are unquestionably bound to get singular consideration. Satta King
Play Bazaar

What you have to do is set yourself up with a credit ready assistance. This administration will advise you at whatever point something new is accounted for on your credit report.
Satta King
Play Bazaar

Peruse all the fine print on anything you read, sign, or may sign at a payday moneylender. play bazaar

Devour slick fish a few times every week. These are high in omega3 unsaturated fats. These acids are unbelievably valuable to eye wellbeing notwithstanding different pieces of your body. Change your determination from wild salmon, fish and mackerel. The more you eat, the more beneficial your vision will be from it. satta king
play bazaar
satta matka

The catches on a coat ought to never surpass three. Besides, a coat with three catches should just have the top-most catch fastened. This is a simple advance to take that will keep you looking stylish throughout the day.
Satta King
Play Bazaar

Web showcasing is an expansive term that can cover for all intents and purposes whatever has to do with advertising on the web. So it doesn't generally make a difference what you're attempting to showcase out there - as long as you can utilize these tips furthering your potential benefit, you ought to have the option to smoke the challenge and win some genuine cash. Satta King Play Bazaar

Satta king
this is amazing site