My department has requested that all faculty provide a picture to be placed on the department website. Problem is, I hate pictures. Hate taking them and am never happy with any that have ever been taken. Even on my wedding day, my photographer, a typical rude Korean man, announced that here was a wedding where the groom outshone the bride. But since he was gay, I put it down to jealousy until I actually received the wedding albums and realized the little fucker was right. Da man outshone me in every shot except for the one of me throwing the bouquet, and only because he wasn't in that shot. Even now, whenever a guest wanders over and looks at a wedding picture, Da man will shoot on over to point out how much better he looked than me. It was August, I was in a twenty pound silk dress sweating my ass off in a New York City park. He, on the otherhand, drank alcohol of every kind at every moment of the day into the night so that by the time we got in front of the officiant, Da man was actually swaying like a slighty inebriated sailor causing me to giggle furiously.

But I digress. I am not keen on the idea of taking a picture for the website. Why do they need a picture? What does plastering my face on a website do to further their academic experience? Think of the harm a disgruntled student could do with my picture? In law school, there was a nasty little bugger who lived in the apartment below me and my roommates. He had pretty much asked us all out in a row and after summarily being rejected by all five of us, he proceeded to cut out our facebook pictures and place them onto the bodies of animals and hung them up on the school student bulletin board. Apparently I was a donkey. We told everyone he had a small penis and wet the bed. He never bothered us again.

So what to do about this picture thing. I thought maybe I could draw a picture of myself instead. 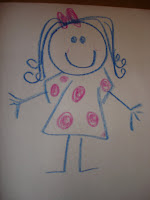 Hmmmmm, this one was a little too cutesy. Too girly. 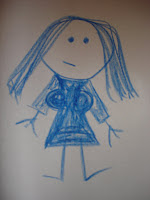 OK - I tried to add breasts and instead they look like I'm wearing one of those donut life preservers under my armpits. But I'm a pretty realistic artist as one breast is slightly larger than the other and apparently when not restrained they both point away from each other. This one was better. I'm not really a dress girl. I live in pants. But it was still too happy. 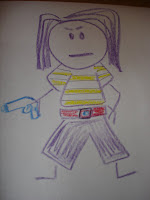 Here we go, that's more like it. Wait, WTF? Is that a gun or a hair dryer in my hand? What the hell did I draw that for? I'm either going to kill you or give you a stunning hairdo. And why the hell am I dressed like a pirate?


Who am I kidding? I am no artist. I have a better idea. Why don't I just post this instead:
What's that? You don't like your grade? Come shake my hand...
Posted by Ello - Ellen Oh at 3:13 AM

Email ThisBlogThis!Share to TwitterShare to FacebookShare to Pinterest
Labels: silly

Ello, I've got a headache, a banged-up knee (fell getting off the bus, and no, I was not drunk), a heartache (three whopping rejections and a teenager from hell), an entire closet of things I can't wear unless I lose 20 lbs, and a humongous pile of laundry that has been steadily and stinkily growing in size over the past 3 weeks I've been back to work (legal secretary: it sucks, but I had to do SOMETHING to earn some money and quit obsessing about my writing not going anywhere).

All that, and yet your post made me laugh my head off! I'll send you one of me if you send me one of yours. Oh -- and I still owe you the cranes! I haven't forgotten!

That 'one of me, one of yours' refers to photographs of us, of course.

Just in case you were wondering...

I like the pirate one with the handgun dryer. That's a teacher I wouldn't want to mess with.

love the self portraits, ello! and that last foto was always how i imagined you looked like! =D

That was absolutely hilarious! I'd love to see which one you actually end up using. It would be hilarious if you could have them use a hand-drawn one. Maybe an art student could do something beautiful and wacky at the same time?

As for the photographer, that is SO RUDE of him! Even if he thought such a thing, he should know better than to say it.

Totally go with the last one! I recently was set up to meet with a very senior executive in a large company and my CFO, who is very organized, sent me this guy's bio with photo and copied our whole exec staff. I responded to all and asked that he pass my photo on to the gentleman, and I attached a picture of Lynda Carter in her Wonderwoman costume. So I say go with the last one.

SEriously - if I could find a picture that didn't make me gag I might just go ahead and post it here also.

The pirate one is definitely hot!

There's a lot of potential in a pirate hair stylist assassin. In fact, it could be your next novel.

Look like that and no one will care if they fail or not.

Oh God, these are funny!
Did you give yourself a C cup or a D cup? hahahahaa! That was the best!

Hey, my "girls" are hitchhikers too.

I love the claw photo. And the pirate hairdresser.

I know just what you mean about having pictures taken. I don't photograph well, either.

You. Crack. Me. Up! Definitely gotta go with the salon-stylist-assassin-pirate!

Ello,
Loved the pics. That was too funny. I liked the pirate the best! LOL. :*)

My fave was the one with the boobs- kinda looked like me in my push up bra - you know - the one I wore along with my new red suit for the DM workshop.

Mary, Ello and Co. - One of these days, we'll get a book deal and it require an "author photo" - something tells me that, more than anything, will inspire us to diet like mad.

i sooo vote on the one with you holding the "hairdryer"...so great.

Too cool, Ello. I'd sign up for your class based on any of those self-portraits.

Absolutely the pirate with the handgun hairdryer. I avoid having my picture taken by always being the one taking pictures.

I would love to take this post to bed, curl up with it, and take a nap. IT's just THAT good. Pictures, the words, comic genius, my good woman.

All pictures are cute - Maybe they show different aspects of yourself...
The last one is perfect! Go with it! :-)

I love these drawings. :)

Holy crap, this is funny!

I hope you sent in the pirate pic.

One of the best posts of all time. This was too cute/funny.

I loved the drawings!

Oh my. I was searching the Internet for things to do ( I know, I know, at two in the morning I should be sleeping, right?) and I came across your Blog. Wow. I find it very entertaining, especially the recounts of your childrens' antics. I hope to read some updates soon! I really like your Blog. ^^

I never post on people's blogs, but that was too funny, Ello. And just for the record, I hate taking pictures too.