Bundegi - A Yummy New Treat Sensation Or Not

In the brand new opening of my revised Seven Kingdoms manuscript, I open up with a scene about bundegi, a popular Korean treat. So I thought I would share with you a little bit about this tasty little snack.


This is Bundegi - boiled silkworm larvae Copyright ksbuehler via Creative Commons license
Doesn't it just look appealing? How scrumptious! They look similar to the huge ass water bugs that crawl around the subway platforms in NYC and they smell like some kind of wonderful that you will never forget. Yes, this is all hearsay. I've never been to Seoul so I have no idea what this is like, but I have been told by many that they are an unforgettable smell. Like a mix between rotten garbage and pungent old dirty socks filled with really old gorgonzola cheese. But wait, you can't go by smell! After all, some of the creamiest and most delicious cheese in the world smells horrendously gag worthy.

So then what does it taste like? Well, apparently they are very juicy little critters that takes you by surprise when they squirt its creamy, salty, briny innard goodness in your mouth, leaving you with the unpleasant sensation of not knowing whether to spit or swallow. Hey, I think more men should try this snack! And apparently it tastes sort of like muddy kidney beans.

I'm sorry, but this is considered a popular treat in Korea? Perhaps this is one of those things that is an acquired taste. Unfortunately, I'm not sure why anyone would want to acquire this taste. But that might just be my American side talking here.

Apparently you can buy the stuff at all these little hot dog vendor like stands all over Seoul. Some old Korean lady with the short bad perm job that marks her status as an ajima (korean word for old married lady) boils them up in a big steaming vat and serves them in dixie cups with toothpicks. But for the toothpicks, it would be like popping brown popcorn, right?

So wrong! I was over at my friend's house when she pulled this out of her pantry. 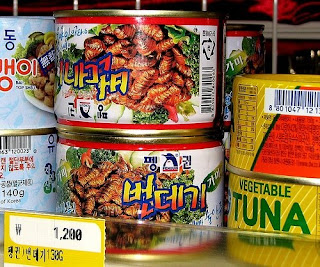 Copyright Todd Mecklem via Creative Commons license
CANNED BUNDEGI!!!!! Said she found it in a local Korean supermarket and had to try it because it reminded her of Seoul. She opens the can and there are like hundreds of these little suckers in this grayish brown dishwater like sauce and she asks me if I want to try one.

But you should try it, for research purposes, she says.

You know, I love research, but to eat something that looks and smells like a turd is just never gonna happen, no matter how badly I need the research. So I pass, ever so reluctantly, and she sneers at me as she pops a couple in her mouth. I turn about as gray as the liquid in the can as she laughs at me.

I ask her - Is it supposed to smell like Ass?

She is disgusted with me.

But bundegi sort of sounds like koondengi which is Korean for Ass. I say.

And you call yourself a Korean? she asks.

Nope, I'll call myself Elmer J. Fudd or anything you want, just so I won't have to eat that thing.

Oh, my! I thought you were really going to eat it!

I don't eat organs and I don't eat anything that has (or had) more than four legs.

OMG! That was hysterical! You couldn't pay me to eat that stuff with somebody else's mouth!

Why did I have to look? I just saw this on the blueboards and said, "Rena, DO NOT look at Ellen's blog! Don't do it!" Do I ever listen to myself?

Ugh! Call me squeamish but I don't eat anything that is too ugly (bundegi included) or too cute (most red meat). I've heard they eat dogs in Korea ... ?

Okay, laughing out loud with tears rolling down my face... so glad you didn't make this blog completely kid friendly...

I'm not that much into food that comes served with its own toothpicks, to be honest.

Question is — will this be picked up by the big fast food chains?

ok. i had to call my korean girlfriends to verify this wasn't some kind of joke post. and it's not. and omg.

HAH! Remember how I said that reading your book made me hungry? I hereby retract that statement.

And now, I shall go off and giggle.

haha! that last foto is AWESOME!! and yeah, the chinese / taiwanese eat some funky stuff too. my mom was just regaling her love for sea cucumbers. ergh.

I agree, more men should try this.

I had to giggle along with Merry on that paragraph...
Your daughter's look is priceless!

I love this post! Yes, we see it everywhere here in Korea and it's very common and well loved.

The smell doesn't really bother me much but when I was pregnant I would walk down the street, smell it and throw up in the gutter. I know. Terrible.

And I had to put it in my story too! It's just too great not too. Hugs!

oh, that was funny.

And your little girl is adorable, even when making that face.

Ha ha! Who thought I was going to eat that? No way! I guess it is really different when you are raised with the exotic stuff and so it doesn't seem weird to you. But when it is out of your norm then the weird ick factor makes it virtually impossible to take.

Like the Filipino delicacy where you eat the duck fetus in the egg? I would slit my throat first.

OMG Ello when I was a kid (between 4-7 years old) apparently I LURVED the duck fetus egg dish and would cry and cry until my mom took me to the restaurant to get it. I don't remember this at all but she swears it's true, but I can't imagine eating it now!

For some reason, this story reminds me of my attempt at dog soup. There was a (North) Korean restaurant in Tianjin, China, in my study abroad year. Our group ordered the dog soup attempting to get over the cultural hang-up, but I couldn't do it. The dog soup went uneaten by me.

Ello, that picture of Angus is just priceless. I think she and I have the same opinion of this treat.

Cumulatively, I've spent over a month in Korea, but no one ever offered me bundegi. I've had grasshoppers (by accident), fermented fish guts, and sea slugs -- and all sorts of other things -- but no silkworm larvae.

Not liking bundegi doesn't mean you're not as Korean as you want to be. I'm part Dutch, and I'm not going anywhere near Limburger cheese. I'm part Scottish, and you won't catch me touching haggis with a barge pole. I'm pretty sure that lots of my ancestors ate stuff I'd retch to contemplate.

LOL. Angus' expression is just priceless. :-) Too funny. Those things look gross. I hate worms of any sort.

Hilarious! The way you describe it, even I would give it a pass!

I did once try the big fat grubby things the Aborigines eat in Australia. At least they smelled appetizing...though that may have been because of the toasted garlic on the side.

OMG: I missed this post. And, I'm not sure if I'm glad I found it. YUCK, EWWW, and whatever Angus said.

And I thought the Danes ate some weird crap. Oh sorry, but you said it smelled like A**.

Naughty! Very naughty! Thank goodness I was finished my tea because I'd have snorted all over my new laptop.

Ok, I'd try those silkworms. Looks pretty good to me.

Ugh...I must admit, I couldn't even read this entire post. Made my tummy far too squeamery. <:(

Reminds me of Faranghi food in Star Trek... they ate larva or something. :D

HAHAHAHAH I was laughing the whole way through this thing! Eww, I would NEVER eat that ever in my life!!

You guys need to calm the fuck down, sure they look disgusting but I guess it wouldn't hurt to try it