We interrupt this programming for a quick update - Author interview with Erica Kirov (aka Erica Orloff) by yours truly, is now posted at the Enchanted Inkpot! Please stop by here! Now back to regularly scheduled programming...

Once again my informal survey has wound up with surprising results. More people liked sushi than disliked it. However, even more people have never tried it.

How. Fascinating. I decided therefore, that we should talk a little bit about sushi. 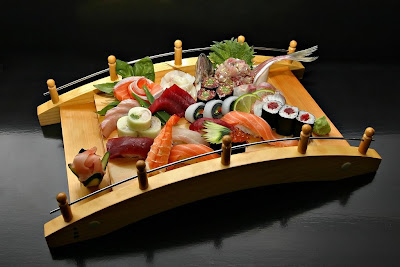 Copyright Pedro Moura Pinheiro via Creative Commons License
Sushi is beautiful and delicious. But like most things, you just gotta find what is right for you. For example, I know that mackerel and sea urchin make me hurl. So I avoid it. But I adore toro, yellowtail, flounder and red snapper. These tend to be milder flavored fish. I even like squid, sweet shrimp and octopus. Da Man can't eat octopus. It's a texture thing with him. He finds it rubbery and offensive. But I have to admit that I may have put him off octopus forever. Cause once when we went to my folks for dinner, my mom made boiled baby octopus with a hot and spicy dipping sauce. They look sort of like this but hers were whiter. Copyright Kent Wang via Creative Commons License
When he stepped away to get a drink, I quickly picked up a baby octopus and bit half of its head off and left it in its decapitated state on his plate. When da man came back and saw the baby octopus with its brains staring back up into his face, his usually tanned complexion turned an eerie sickly color and he began to gag and ran to the bathroom. I laughed my ass off. Since then, the boy has not been able to eat octopus.

But I digress. Let's go back to sushi. It is interesting to note that the history of sushi began in China, as with most things Asian, and evolved centuries later in Japan. What we now call sushi is far different from its origins as a salted fish fermenting in rice process. The process was used to preserve fish and the rice was thrown away after the fish was removed. The Japanese evolved sushi by adding rice wine vinegar to the rice and eating it with the half raw fish. Now it is as much an artform as it is a cuisine. Beautiful platters of sushi and sashimi (raw fish without rice) are a feast for your eyes as well as your stomach.

In Japan, training to be a sushi chef is traditionally a very long and rigorous process. They must train as an apprentice under a sushi master for 10 years. A good shushi chef not only is a master of the delicate knife work needed to be a great sushi chef, but also is a creative artist. But in the states, it seems like anybody can call themselves a sushi chef. This is not a good thing.

To become a good sushi chef, you don't have to be Asian. Any nationality can excel at this art. But you do have to have good training. Unfortunately, while many places serve sushi, not every place has a good sushi chef, and this can ruin the experience for a novice sushi eater. For example, certain fish can be ruined by a poor knife job, leaving it a tasteless slab of goo. Also, a good sushi chef will never serve a piece of fish that is off. A bad one will. This can be the difference between enjoying your first experience with sushi or spending your night clinging to the rim of your toilet.

So to all of you out there who said you never had sushi or didn't like it, I say, "You do not like them, so you say. Try them! Try them! And you may. Try them and you may, I say."

But please don't go to any corner sushi spot. Make sure you get a good write up at your local food critic column or other reputable recommendation. Make sure you have a true sushi chef and not some fake sushi chef with a matchbox sushi chef diploma. And whatever you do DON'T buy the pre-packaged stuff at your local supermarket. Cause if you do, you might as well take a whole box of laxatives and call it a night.
Posted by Ello - Ellen Oh at 12:10 AM

Oh we love sushi and my husband and kids love this restaurant:

But I think I would have been running to the restroom too if I saw a baby octopi with his little head bitten in two :(

Still not convinced.... although I do agree it does look very pretty.

Still not convinced.... although I do agree it does look very pretty.

You are an evil, evil woman Ello. ROFL. I had to laugh so hard at the octopus comment. Bad you.

We love sushi too...I worked at a Japanese company and it seemed for every little thing they rolled out the sushi. I'm afraid I got pretty spoiled for it.

Interesting history. I never knew all that.

I always thought sashimi was sushi with raw fish in it, so I've learned something new.

As far as prepackaged sushi goes, the only one that can survive that process and be good is the All American version of sushi, the California Roll. I love those things, too!

I just can't do the raw fish. I can't. My hubby loves it all though! I do like the ones with just the rice and seaweed though!

when i took the husband to eat his first sushi during our college dating days, we sat at the bar, he took a brave bite and then spit it out. then we had to go to wendy's. travesty. almost didn't marry him. but he's coming along nicely and will eat most (also nonrubbery) sushi now.

Bonus points for the Green Eggs and Ham quote :)

I haven't tried sushi and probably never will. I don't even like fish cooked. Also, I have a weak stomach and just don't think I could get past the mental part. Also, I'm a wimp.

you're so evil. WHY. aGAIn. and all i have for lunch is this peanut butter sandwich...

I agree with Moonrat! Now I want sushi, and only have soup...

Thank you for the history, though :). Fascinating stuff!

I totally agree about the proliferation of substandard sushi. Done well...mmmmm...

The only bad sushi I have ever had was a friend's home made vegetarian version. It was like a slice of dried vomit on rice.

I love quite a lot of sushi, particularly tuna in all it's permutations. I don't do the octopus either, and it's because of the texture.

I love love love sushi! There is a neat little place in Charlottesville, VA, Sakura, that arranges the sushi pieces into objects, like a dragon or a flower. It's so cool. I love edible art.

Lovely memory to revisit just before I started to eat my lunch!

As an aside, some of the best sushi I've had is fresh striped bass (a.k.a. Rockfish) out of the Chesapeake Bay - Ello can attest to this as well.

As a matter of fact, I was on a charter this past weekend and after we got back to the dock, one of our crew memebers pulled out a seasoned batch of pepper paste (we Koreans use this a lot in lieu of wasabi). He then proceeded to slice up a Rockfish right at the dock (with expertise), and we dined on "fresh" sushi. Rockfish is a white and very mild tasting fish so no "fishy" taste as you might expereince with other fish eaten so fresh.

By the way, great interviews!

Great post! Years ago I was curious to try sushi, but had no idea where to go or what was what. Fortunately, I had a friend whose husband and kids were huge sushi connoisseurs (she won't eat anything not cooked), so we all went to a place they especially liked, where the sushi chef knew them well and I had the sushi tutorial and tasting of a lifetime. It was a great way to learn what everything was, how to eat it and definitely a great way to try some of the scarier things that I'd never have ordered on my own.

I love it all, Ello, and you can give me your uni (sea urchin) and mackeral anytime! And I'll have all the baby octopus anyone wants to send my way.

In San Francisco, I once told my Chinese students that sushi was originally from Japan. They insisted I was wrong, but a few weeks later, one of them sheepishly admitted I was right: his grandmother had confirmed this. If your blog had been around then, it would've helped a lot.

Americans want to do everything the fast way; instead of taking a couple of months to learn how to fall in judo, for instance, they want to learn this in days. The Japanese go to the opposite extreme, but I think they're onto the right thing here. And when it comes to sushi chefs, I don't want some guy who's had a year's correspondence course; I want a guy who's done his time, can sharpen his knives on a coin, and doesn't serve me some raggedy looking crap that he calls sushi but I wouldn't give my cat.

I suspect I would struggle with sushi as it ticks so many of my NO boxes.

Squishi, however, I can manage any time — especially blancmange.

*Thinks — now I've gone and made myself look like a right pleb...*

This is fabulous. For as many times as I've seen you on other's blogs, I can't believe I haven't been here to taste your wares! I love Sushi. Used to date a sushi chef, but he was one of 'those'. Actually, it turns out that a vast majority of Japanese Sushi restaurants are owned and run by Chinese business men that know Sushi is good money. I found that out from my Chinese boyfriend Sushi chef.

That picture of sushi? It's seriously making me hungry for it and it's 10:30am. Yum.