We are in Wintergreen Resort, Virginia. It's beautiful and the weather is perfect. It's 80 but not hot. It feels wonderful after the oppressive heat and humidity in DC. The only problem is that we are in bear country and the girls are terrified of bears. I blame Animal Planet.

The girls watched an episode of "When Animals Attack" where a black bear kills and eats two people and goes on a rampage and attacks several others in a Canadian hot springs Mountain resort. The worst part of the show was that they did graphic re-enactments and did the part where the bear apparently begins to eat the people while they are still alive. Why did I let the girls watch this show? I was working on my laptop and the girls like to watch some pet dog show on Animal Planet. By the time I realized what they were watching the damage was done. The girls were officially scared of being attacked by bears.

So Da Man gets the girls up and announces that we are going on a hike. The girls freak and panic and insist that they are not going on any hikes because the bears might eat them. Da Man laughs at them and says we're not going to see any bears.

"Oh yeah? Check this out!" Angus turns on the resort channel that is playing a segment all about bears and how some bears have been known to come right up into people's houses.

"Don't worry, we won't see any bears," he blusters.

"Oh yeah? What about the sign on the trash can?" Oldest asks. 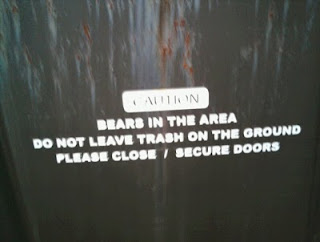 "We are not going to see any bears on our hike!" Da Man yells.

"But what if we do?" Angus whimpers.

"Don't run," he said. "Unless it chases you. Then you need to climb a tree. But then some bears can climb trees."

Maybe goldilocks and the three bears would be a good read for them - oh wait, the bears scare her away...

It is sensible to be afraid that bears might eat you. More sensible than, say, putting a marshmallow in your mouth and trying to get the bear to take it. Bears like marshmallows as much as anyone, but they might also like the context. Or, not. Well, only one way to find out.

As someone lives in bear country, I know your girls' fear all too well. It's a good fear. It keeps you on your toes so you don't do anything foolish. (Never run, btw)

Hope you had fun on your hike!

My thesis supervisor had this great story about going trail running one morning, coming around a hairpin turn, and finding himself nose-to-nose with a black bear.

Apparently he and the bear leapt about six feet in the air in terror before they bolted in opposite directions.

He,he,he. I remember being 14 and in the Smoky Mts. My daring younger brother decided to fall from the top of a water fall and damage one of his hands (this was a normal activity for him, I don't even remember if he broke anything) and my father had gone on his own hike... It was my job to go find father. I am walking up all these different trails yelling his name (he is partially deaf at this time) and getting no where. We had seen bears already in the park I turned a corner and couldn't figure out if what I saw was a bear or a tree stump. (decided that I needed new glasses, but had to wait until we got home.) I must have approached that same spot four times before I figured out it was a tree and yes that was the trail my father took.
(Worst part about trip sitting in car waiting for stupid brother to get out of emergency room one more time!)

ack! best beware the bear, and not wander too far from safety...

Satta kingc
this is amazing!!!