Today's guest post is by the other member of the Ninja Triad, the great and all powerful Mike Jung, who my kids like to refer to as Zombie Mike. This is because for some odd reason when they were on a zombie kick, they all delighted in drawing pictures of Mike as a zombie. Mike is also hysterically funny and wildly talented (yes being hysterically funny was a requisite for being a member of the Ninja Triad.) So I take special pleasure in welcoming Mike to guest post for me!

Hey there Ellen Oh’s blog readers! You may or may not have read my post for DEAR TEEN ME, where I first said what I’m basically gonna say here – I, uh, don’t get too worked up about what I could have done differently in the past, just because it’s done, ya know? And when we’re talking about my nascent career as a writer, well geez, I like how things are going these days. I’m working with the best people, having fun, meeting other writers, feeling as confident of my creative abilities as I ever have...my career feels like it’s off to a pretty good start.

So I’m halfway inclined to make my advice nothing more than “you know what, just keep doing what you’re doing – the letters, off-the-cuff short stories about alien rabbits, bizarre explanations of art projects, song parodies, actual songs, inappropriately handled essays, weird one-act plays, and all those emails about nothing at all – keep it up, yo, because it’s gonna happen. You’ll be a writer.”

But of course who can resist the siren song of what might have been? And there ARE moments that have stayed with me over the years. For example, there was that guy I met during orientation, right at the start of my freshman year of college – the one who said he was writing a novel. I remember saying “cool, dude,” or something equally inane, but I also remember thinking “a novel? Really? Who does that? No way can this guy write a novel.”

Yep, that’s right, my advice isn’t something as standard as “don’t listen to those asshats who insist you can’t follow your bliss,” although it IS good advice, and not just because I enjoy saying “asshat.” Don’t get me wrong, though, “disregard the haters” is an integral part of my advice - in fact, you could rightly call it prerequisite advice. Disregard the haters, because if you don’t, you will become one of them. 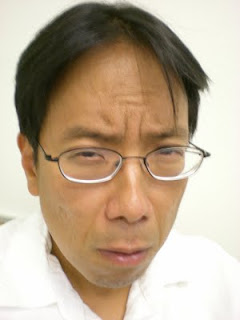 THIS! Avoid making this kind of doubting asshat face!
“But Mike!” all of Ellen’s blog readers squeal in protest. “You’re not a hater! …um, are you? I only know you via the internet, after all, so maybe you are? I don’t know…” Well, I like to think I’m not, but to be frank I’ve indulged in my share of bad attitude. And maybe there’s not all that much to be done about it in the end, because, well, life is just much bigger than any single piece of 20/20 hindsight. Still, advice aimed toward one’s younger self can be relevant to one’s future self too, right? And “don’t be a hater,” despite my fondness for the verbiage, is reductive.

Ah yes, it’s taken me this entire blog post to figure out how to say it. What I really, really mean to say is learn to cope with fear. Fear that you’re not good enough, fear that the haters are right, fear that you’ll try and fail and end up feeling worse than when you started, fear that your insecurities will prove to be cast-iron truth…fear that you’re a loser. The haters? They’re just barfing up their own fear all over you, buddy, trying to force you to carry that burden for them instead of learning how to cope with it themselves.

Don’t forget the fear – yeah, right, like that would ever happen, but seriously, the fear is a really nutritious kind of mulch for your future creative efforts. Just…learn to cope with it without turning into a hater yourself, and that’s tricky, chump. As we’ve already seen, you’re eminently capable of it. I could say “if only in your own mind,” but that’s the most important component of it, because that’s where you unleash the hate on yourself. That guy you met in college? Who knows where he is, but your internal skepticism didn’t affect him at all. The only person it affected? YOU, CHUMP. And damn, boyo, it’s so backward, because you’re good at this! You can write like hell!

Which I guess brings me full circle. Learn to cope with fear, ignore the asshats, don’t become a hater…sounds good, right? Sure it does. Keep cranking out the weird little stories, oddball letters to friends, song parodies, bizarre one-act plays, inappropriately fictionalized school essays, slightly unprofessional work emails, and so on. In fact, you know what, just keep doing what you’re doing, because it’s gonna happen. You’ll be a writer.

Mike Jung still writes all kinds of strange and random stuff, but these days he does it mostly via blog posts and Facebook updates. Oh yeah, he also got past the hater barrier and wrote a middle-grade novel called GEEKS, GIRLS & SECRET IDENTITIES, which is forthcoming from Arthur A. Levine Books/Scholastic.
Posted by Ello - Ellen Oh at 12:15 AM

While not making doubting asshat faces is great advice, I think this is even more brilliant: “disregard the haters." Well said.

I had folks that I thought were friends ridicule the crap out of me when I started writing. "Ooooh, look at the renaissance man." was one that stung the most.

That hurt, but it was a revelation as well. I realized there are basically two kinds of people in your life: those who lift you up and those who drag you down.

Jettison the negative ones from your life immediately.

Don't be the kind of asshat that drags other people down.

Don't be your own asshat. Treat yourself like you want to be treated. Would you be friends with someone that spoke to you the way you speak to yourself?

If we get enough comments on this post I might actually do a video of myself doing the asshat doubting dance... (and thanks everyone!)

Thanks, Mike! That stuff's good to hear!

Good stuff, Mike. Don't be a hater - and don't listen to them, either.

It needs to be a t-shirt.

Is an asshat, like, something you wear on your head? Or somewhere else a bit further down? Most confusing... he he he.

Very funny post, Mike, especially the attempt at the asshat expression... not sure you nailed it, though!

Clearly, Mike, you are on your way to making "asshat" part of everyday lexicon, like "tweet" and "epic."

Seriously, though, I love that you remind yourself that all the stuff along the way brought you to the *now* and was an essential part of the journey. And the advice -- to basically keep on truckin' -- is a good reminder for all of us who sometimes wonder what the heck we are doing.

You have an unique voice. It is always difficult to get over the fear of embarrassment. We have to ignore the naysayers including the voice of doubt and fear in our own heads.

You are a funny, funny man. Thanks for amusing me and reminding me.