I am so happy to announce the release of my Ninja buddy, Mike Jung's, spectacularly funny debut titled GEEKS, GIRLS AND SECRET IDENTITIES! This is a book I got to read in a draft form. It is a book that made me howl with laughter. It darn nearly made me have an accident! And let's face it, this is one of the coolest book covers ever! A giant robot? Yes please!! 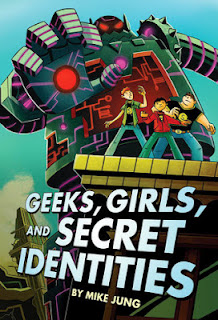 Can knowing the most superhero trivia in the whole school be considered a superpower?

If so, Vincent Wu is invincible.

If not (and let’s face it, it’s “not”), then Vincent and his pals Max and George don’t get any props for being the leaders (and, well, sole members) of the (unofficial) Captain Stupendous Fan Club.

But what happens when the Captain is hurt in an incident involving BOTH Professor Mayhem and his giant indestructible robot AND (mortifyingly) Polly Winnicott-Lee, the girl Vincent totally has a crush on?

The entire city is in danger, Vincent’s parents and his friends aren’t safe, the art teacher has disappeared, and talking to Polly is REALLY, REALLY AWKWARD.

Only Vincent Wu has what it takes to save the Captain, overcome Professor Mayhem, rally his friends, and figure out what to say to Polly. But will anyone take him seriously? Seriously. Anyone??

Find out in this action-packed super comedy debut.

So yesterday my youngest had to miss school. We discovered at the beginning of soccer season that she had ongoing pain which was diagnosed as Sever's Disease, which is a bone disorder involving the growth plate in the heel. It is not dangerous and she will eventually grow out of it, but it means she is in a lot of pain when she overuses it. So the orthopedist put her in a boot today. Poor thing. She was pretty depressed about it so I took her to the bookstore to buy some books. I had told her to keep an eye out for Mike's book and sure enough, she was the first to spot it! 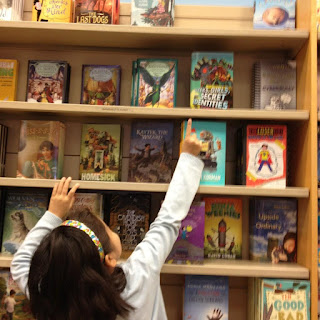 If she didn't have a boot on I think she might have climbed the shelves to reach it. As it is, she's on her tippytoes! She was really excited to finally get her hands on Mike's book! When we brought it home, the other girls all freaked out! They are the co-presidents of Mike's super secret fan club so they feel pretty proprietary about the book and think it should be on the NYT bestselling list like right now!

And so I have the great pleasure of having a giveaway of my friend's awesome book! All you have to do is leave me a comment or tweet me that you think Geeks and girls and secret identities is cool! Then you will be entered for a chance to win a copy of Mike's super cool book!


For more information about Mike, you can check out Mike's blog or follow him on twitter.
Posted by Ello - Ellen Oh at 10:59 PM

THE OH FAMILY IS MY FAVORITE FAMILY. Well, except for mine. I guess.

I would LOVE to enter this giveaway (I'm really excited about this book!) - but I lives in the UK, and I'll totally understand if the giveaway is US-only. Yay for it being out in the world!

Oh heck yeah I want a copy of this book! Also, Mike Jung is pretty awesome. Love the pic of your little one reaching for it!

Mike is beyond cool ... and we'd love to win a copy to share with our friends, so please add my name to the hat.

Your daughter is just about getting ready to tip that bookshelf over. Oy!

SO excited about this book!

I met Mike at SCBWI-LA and got to see the ARC of his book - very fun! Thanks for the giveaway and hope your daughter's foot feels better soon!

I want a copy of this book so, so bad! 'Cause, you know, Mike is totally awesome. :)

Thank you everyone for supporting Mike!!! And I'm happy to make the giveaway international!!!

I can't wait to read this book! Of course, I will have to arm-wrestle my son to see who gets to read it first...

This definitely sounds like an awesome book and I am so going to have to read it! Thanks for the giveaway : )

I love Mike's sense of humor! He always makes me laugh on twitter!

Yay! Congratulations Mike!! I can't wait to read this book -- if I can beat back my children who will surely try to grab it first. :)

So let's all get this book on the NYTs bestselling list like RIGHT NOW! Congrats, Mike! Off to tweet and FB up a storm for you!

I don't want to win it. I'd rather buy my very own copy - but the picture is awesome. Mike you must be floating this week!

Go Asians! I can't wait to read it! I must follow both your footsteps someday! LOL

Very excited for this book! We requested that our city library purchase it :) We would love our own copy!