Food is one of my favorite subjects so why not include some of my favorite dishes on my blog? We will start with my favorite barbecued meat. Kalbi. If you have never been to a Korean restaurant, then you have never had the ubiquitous pleasure of grilling right at your table, smoke watering your eyes while the sweet garlicky goodness of succulent short ribs assaults your olfactory neurons. Walking out, you reek of barbecue and garlic that lasts with you until your next shower, but boy was it tasty! 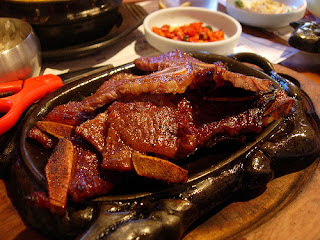 Oh the pleasures of Korean barbecue. Beef short ribs marinated with soy sauce, garlic, sesame oil, green onions and sugar, grilled over a hot flame. Since I am the designated grillmaster, I get to choose what I want to grill. My first choice for barbecue (next to the obligatory weiner roast) are these amazing, delicious, out of the world Korean short ribs. For a carnivore, there is nothing better. The meat is slightly sweet with the tang of garlic, soy sauce, sesame seeds and the smoke of the grill. Heaven! 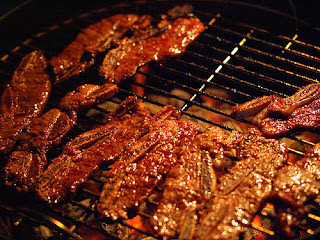 The problem with Kalbi is that if you go to a restaurant, they will charge you $17 to $25 for a dinner size portion. While it is a good amount of beef, it can be quite expensive. And if you've got a table full of carnivores, the bill can get quite hefty. Also most restaurants tend to make their kalbi on the sweeter side, which is not my preference. But, I've yet to go into a Korean restaurant that didn't have good kalbi.
Luckily, it is actually quite easy to make. Especially if you have a Korean market nearby. You can get Kalbi already marinated and ready to grill for $5 to $7 per pound. A lot cheaper and just as good as the restaurant version. But if you don't have a Korean market nearby, then get your favorite grilling meat and the following recipe and make it at home.
Kalbi recipe
4 pounds Korean style short ribs (which is cut thin - see picture above), or other good grilling meat
1 1/2 cups soy sauce
1/4 cup white sugar
1/4 cup sesame oil
3 tablespoons vegetable oil
8-10 cloves of fresh garlic, crushed
6 large green onions, chopped roughly
Toasted sesame seeds
Combine the soy sauce, sugar, sesame oil and vegetable oil in a large mixing bowl. Add garlic and green onion and stir together. Put short ribs into large sealable freezer bag (you may need two). Pour marinade into bag and mix with meat pieces. Refrigerate for at least four hours or overnight. Heat grill to medium-high heat before adding the meat. Drain excess marinade off short ribs and grill them until medium, about 6-8 minutes. Sprinkle with toasted sesame seeds and chopped green onions.
Pretty much every recipe for kalbi is like the above, with variations on amount of sugar and garlic used. Serve it with a side of hot steaming rice and some red leaf lettuce for freshness, and you've got one of my favorite meals ever created.
I wanted to write about food because as I was going over a section of my WIP, I realized I was reading about a character going through the motions of cooking dinner. And it struck me that I had put quite a lot of detail into the preparation of the meal but none in the actual food created. That struck me as peculiar. Was it because what my character ate was irrelevant to the story line? It seemed such an important detail to omit, especially from someone like me who loves food and the idea of food in all its amazing permutations. I don't know the answer but it made me pick up some of my keeper books to see how food was handled. And in most cases, I realized, food was lovingly portrayed. It was a way to anchor a scene or to create an atmosphere with. Eating alone, no matter how lovely the food, signalled loneliness. Food, whether it be junk food or an elaborate meal, prepared for family was usually filled with warmth and laughter. In many cases food was as much a part of a scene as the room, the secondary characters. When it is not there, its absence is noted. Its importance cannot be denied. So I need to promote my love for food in a written venue so I can be as comfortable writing about it as I am eating it.
Picture 1 Copyright by wEnDalicious 2007
Picture 2 Copyright by Taekwonweirdo 2007
All avaible on Flickr through the Creative Commons License
Posted by Ello - Ellen Oh at 11:25 PM

Yum! Kalbi sounds great and I don't believe I've ever had it. I think the way food is handled in fiction is really interesting too. I finished Michael Chabon's The Yiddish Policemen's Union recently and he had more than one great scene with his main character eating semi-bad kosher food in a Yiddish cafeteria -- with the exception of the noodle kugel which is, of course, legendary in the fictional Jewish settlement of Sitka, Alaska. Of course the MC is a divorced, alcoholic, depressed loner, which made the cafeteria dining all the more sad. But I agree with you -- descriptions of food preparation and enjoyment (or not) are a great way to enhance a story. Great post!

sweet lord..what time is dinner? Or "dinnah" if you are from the boston area like me.

i love me some meat....i have never had this but it sounds divine.

I don't think I've ever had the fancy version of kalbi. Here, kalbi is fast food. I can go down to the school cafateria, to the Yummy Korean BBQ chain, and get kalbi, 4 vegies, and two scoops of rice for $7.50. Of course, I am sure that the fast food version of kalbi isn't quite the same as the $25 version like a McDonald's hamburger bares little resemblance to a real one.

By the way, every grocery store here sells bottles of kalbi sauce. If you would like me to ship one your way to try, just yell. I've never tried any as we just got a little grill a couple months ago.

I knew I liked you. Finally a recipe that makes my mouth water.

I will definitly be trying this and letting you know the results.

Lisa - That's on my to read pile. And I'm glad you agree with my assessment of food in books. It definitely has an importance.

Paca - we have the bottled sauce but I didn't like the one I tried. It's much easier to buy it already marinated. I'm lazy that way, but this recipe is good when you have time to do it the right way.

You all are welcome to Korean barbecue if ever you come down my way!

I am SO hungry now! This looks delicious. Thanks for the recipe!

Of course not AW! I'm glad you did such an important post today.

I lived in Korea for 3 years and out of it came a great appreciation for the food. My family and I have been eating short ribs prepared this way for about fifteen years. A family tradition of ours was to put a metal bowl in the middle of the table where we'd toss the bones in after we'd finished. KLINK! KLINK!! The louder, the better.