You ain't Korean unless you've had ...

Han-Yak. That's right. Nasty, stinky, vomit inducing Korean herbal medicine that makes you want to cut your own tongue off rather than drink it. 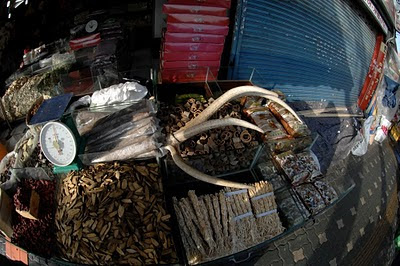 Thought I was going to say Kim Chee, right? Well, actually I've had people describe kim chee the same exact way, so to each his own. But today I am not waxing eloquent about the hot and spicy pickled cabbage dish. No, I want to revisit my youth in painful detail with you.

Most children with Korean parents have endured being grabbed in a head lock and having their nose pinched ruthlessly by their mother as halmoni (grandma) pours a brownish/black, warm, stinky, herbal concoction down their throats. I remember letting the foul stuff leak out the side of my lips and down my neck to try and keep from vomiting, only to get smacked on the head by my little old halmoni while she shouted that I was spitting out liquid gold. Apparently gold tastes a lot like horse manure. My sister had a much better method of dealing with the han yak. As soon as they forced it down her throat, she'd immediately hurl it back into halmoni's lap, along with whatever else she'd been recently eating. After about the 10th time of being covered in puke, halmoni finally gave up on her and poured all her han yak lovin' to me. The big dummy who dribbled instead of spewed.

So what is this mysterious medicine that tastes like fresh yak poop? Apparently it is an ancient herbal medicine philosophy based on restoring the proper flow of "gi" in the human body. It relies on a variety of sources such as plants, minerals and animal parts. Depending upon what your medical problem is, they have a different mix of the three just right for you. They used to put bear gall bladders, seals testes and rhinoceros horns in the stuff before it became illegal. Now we are so lucky to have deers antlers, sea horses, bats, scorpions, centipedes or geckos instead. But at the heart of any good han yak is ginseng, the most prized Korean product. Ginseng itself is not bad. Smells like a root and tastes like a root. Nothing to vomit over. But when mixed by a crazy little old Korean "doctor/quack" with the other 20-oddball, scary, freaky, han yak ingredients, it becomes unpalatable. Han yak makes Vegemite taste like Nutella. And it gives you horrible gas, and the gas would smell just like han yak, and you would try to run away from the smell, but it would linger wherever you went cause you were now the source of the odor.

So why drink it? Well Koreans swear by the stuff. They believe it cures just about everything - migraines, menstrual cramps, hernia, stomach aches, nose bleeds, and even broken limbs. Yes the han yak is so potent it will help your bones knit itself together again. Now that's liquid gold!

But does it work? Let me put it this way. I would NEVER EVER EVER tell my halmoni that I felt sick. NEVER! I remember breaking my pinkie in the school yard and crying like a baby. But when I got home, I put on a pair of gloves and acted like nothing had happened. My pinkie ballooned to the size of a McNugget and I'd pretend it was a sausage that I was eating. Luckiy, my halmoni had terrible eyesight. To this day, my right pinkie is blatantly crooked from having set it myself at the age of 11. So as far as my halmoni was concerned, I was the healthiest kid in the world and han yak was the reason.

And there was no more effective punishment than han yak. Just the threat of the stuff would have me begging for forgiveness for crimes I hadn't yet committed. The worst part was, I'd still get the han yak.

My kids have no idea how lucky they are that I don't make them drink the stuff. They have no concept of the misery I endured... But then again, perhaps I should further explore the benefits of han yak as a punishment.

I used to make my kids take liquid echinacea until I tasted it myself - YUCK!!! Now we take the pill form

Very funny. The medicine my kids get from the doctor here makes they burst into tears because they think I'm torturing them. So maybe the counter and herbal medicine aren't much different? :-)

LOL! I don't think you could've described this any better.

You painted a vivid image!

Just add lo quat. That stuff makes any of that asian herbal medicine almost tasty, lol. I used to get traditional chinese medicine and every time I'd boil that stuff up I kept seeing the junk swept up off the floor after a building demolition.

By the way, I have given you an award on my blog.

During university, a house-mate of mine was having panic attacks, and her mother sent her--at great expense and possibly illegality--a packet of traditional Chinese medicine to help cure her.

I and the other house-mates stood around the stove on the day she dutifully boiled it up, staring at the assorted, brown, scary things burbling in the pot and smelling that...very odd smell.

And we never teased her again about eating small, mysterious things with tentacles. I mean, at least that stuff was recognizably edible. The medicine? Was not.

My dad used to force me to take liquid Nyquil as a kid.... until I barfed it down him in protest :).

Your sister had the right idea! (Also, that gas sounds horrifying, like biological warfare.)

All I can think of is that your sister yakked han-yak :)

Wow, and I thought it was bad when I had to stay at the table to finish my chicken and potatoes.

I wanted to visit your blog because I kept seeing your entertaining comments at other blogs. I like it here. :)

Poor Ellen! My sister was always better at getting out of stuff, too. She tried to teach me her evil ways, but the dark side was too scary. Plus, she had her mouth washed out with soap once.

I can't believe you set your own finger! You were one tough kid. Maybe not tough enough to stomach that medicine, but still pretty darn tough.

That sounds like utterly disgusting stuff! Your girls don't know how lucky they are. :)

I remember a couple of bad medicines my mom gave me as a kid. I decided that the condition wasn't as bad as the medicine & never complained about it again.

Check out my blog on Thursday 'cuz I'm giving you an award. ;)

OMG. I really needed to laugh--you made me feel all better. Thank you!

I was fortunate to avoid the stuff since we lived in Upstate NY and there was no way my parents could get any good Korean stuff. Instead we were terrorized by ginseng in various forms.

Your kids are very lucky.

i've consumed a lot of korean ginseng, but NOTHING will convince me to try ANY han yak! ;)