The aliens and I are in NYC visiting my parents. As usual my Mom decideed to subtly comment on my weight. We were walking outside to take the aliens to the pier, when my mother turned to look at me and sighed. "Girls, do you know what is the one thing I wish for the most in life?"


Oldest - "That the republicans were back in office?"


After she poo poohed everything but the republicans comment, she pointed at me and said "I wish someone would put your Mom on a makeover show so that she can be beautiful again."


As I began to choke on my gum, they all turned to look at me. I was wearing a gray t-shirt, jeans, and flip-flops. My hair was wet and the only makeup I ever wear is eyeliner. If it were cold out, I'd probably have a hoodie on. But it was over 90 degrees out and muggy so I was already starting to sweat and get red in the face. I growled menacingly at all of them. No one said another word. Score 1 for Mom.


Later that day my Mom told me that since it was Father's day, we should go buy a watermelon for my dad. "Besides, watermelon is good for your diet," she said.


So we walked over to the local Fairway supermarket which is about a brisk 10 minute walk over on Broadway. My parents have a car in their building's garage, but since we are walking I'm envisioning cubed watermelon in plastic containers or maybe even a pre-sliced quarter of watermelon. I've got my reusable shopping bag in my purse that I carry everywhere so I feel confident that I can carry some watermelon back. But when we get to the supermarket, my Dad bypassed the cut up squares and the presliced watermelon and goes to pick up a big ol' watermelon. 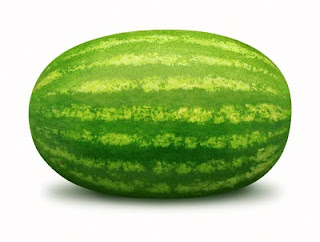 The thing had to be at least 10 to 20 lbs but felt like 50! It was so big it didn't fit in my reusable shopping bag!!! The sales clerk doubled up the plastic bags, but they're so flimsy I had no choice but to carry this behemoth like a baby in my arms for 5 blocks and 2 avenues. For those of you who don't know what a NYC avenue is like - well it is the equivalent of 3 regular city blocks. I carried that thing for exactly 0.7 miles. I checked google maps. Sweat poured down from my hair like I was caught in the middle of a tropical monsoon. My face was magenta and had a little pig built a house out of straw or sticks, I would have easily blown that sucker down with all my huffing and puffing. My arms felt like they were being pulled from their sockets and my legs had turned to lead. Even the aliens buzzed about me sympathetically but were of no help.


As we neared home, I said to my mother, "This better be the most delicious watermelon in the world!"


To which she responded, "Even if it isn't, I told you it was good for your diet!"


A terrible suspicion gripped me. "Is this what you meant by the watermelon diet?!!!"


My mom laughed, "I bet you lost 3 lbs today carrying that thing home!"


I've decided to trademark the watermelon diet and make a billion dollars selling watermelons in slings for people to carry around everyday. I'll call it the "My Mom is trying to kill me" diet. And I'm sure it will be a bestseller.
Posted by Ello - Ellen Oh at 12:10 AM

Okay, I admit it your mother's comment was a low blow and making you walk almost a mile carrying a heavy water melon was not nice. But...I giggled my whole way through this post!

Moms can be very devious ;)

My mother always knows how to get under my skin. But I'll have to admit, it sounds like the watermelon diet could work :)

I can't believe you had to carry a giant watermelon for 0.7 miles! Aiee!

I loved this story though--it totally reminded me of my very blunt mother. I gained about 20 pounds in college (I love food, what can I say?) and my mom would point out this fact to me every time I went home for a visit.

After awhile, I growled to her that I didn't want to hear about my weight anymore. To which she replied sweetly, "If I don't tell you, who else will?"

Your mom and mine must be in cahoots. My mom is on the same campaign. What a funny story!

no doubt it would be a best seller... as would a book on what your aliens say ;) lol

LOL! All mothers must be alike, but my dearly departed has been gone for most of my life. Not having a mother doesn't stop it. My eldest brother has assumed that role. I can't go for seconds in his house without hearing "No wonder you've gained weight". You have my sympathies, though I'm in stitches.

Thanks to everyone for your sympathy and support. I am still recuperating from the watermelon diet. To help me recuperate I followed the Lay on the sofa and eat ice cream regime. Unfortunately I am still tired. I must follow up with some brownie medicine to boost up my energy...

LMAO @ the lay on the sofa and eat ice cream regime and brownie medicine for more energy. Love it!

LOL! Oh my goodness, this story made me laugh--not at your expense, of course, but at the humor in your writing. ;)

See, Ello, this is why being Italian comes in handy. I've spent my whole life being told to eat something, have more, here's a bigger slice, you're too skinny. It doesn't matter what weight I am, even if I could stand to lose a few pounds, Italians always think you're too skinny.

Ha! Your Mom kills me! If you won't put a picture of yourself up on your blog, can we see your Mom? Because I think I love her.

Wow...So to your mom the only thing that counts in life is looks? That's sad.